Book Review: Coin of the Realm by Michael Murphy 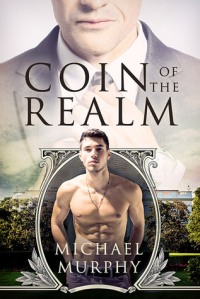 Blurb:  Timothy Mitchell worked his way from humble beginnings to graduate school in Washington, DC. The end is in sight—but so are his funds. Determined not to let his dream slip through his fingers, Timothy goes from part-time jobs to modeling for art classes, to stripping, and finally to working as an escort to pay his tuition.

The nation’s capital is full of powerful men and secrets, which Timothy learns firsthand when he takes on a client who demands absolute anonymity. Even though Timothy realizes he’s sleeping with one of the most influential men in the world, he must keep up the facade. Despite that, their association moves from sex to love.

But power and secrets also mean danger. When Timothy is violently abducted off the street, all because of what—and who—he knows, his lover must make a decision: risk his power and position or lose the man he loves.

Review: This was a fun, albeit somewhat bizarre story about Timothy, a college student who finds it more expensive to live in DC and go to school than he expected. Out of options, he tries nude modeling, which doesn’t work out so well, and then moves on to escorting to pay the bills.

The story quickly picks up when Timothy is hired for an anonymous client. He is subjected to being blindfolded, taken to somewhat remote locations, strip searched, etc. before actually meeting said client, whom he quickly figures out the identity. But the two make a connection and Timothy continues getting calls to meet with said client, their relationship growing along the way.

You really have to be able to suspend your beliefs for this one. There are so many ways this would never happen that it is very difficult to buy what is being sold. But, if you can put those aside, you’ll find a really sweet story about two guys falling in love despite their different occupations and the difficulties associated therewith. Timothy comes across as very mature in some ways, yet not so much in others, but he makes do the best he can. As for the other participant here, he ended up finding what he had been missing in Timothy, and the two made a nice couple.

I’d consider this a nice afternoon read that doesn’t take up too much concentration to enjoy. It is a story that shows how there is someone for everyone, and even the most important people need love and companionship in their lives. I enjoyed it, and who knows, in some alternate universe, perhaps this type of fantasy could come true.