Book Review: The Difference Between by Blake Moreno 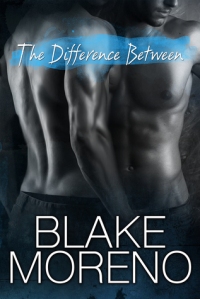 Blurb:  Wade Maguire and Russ Paulson are in love. After a year of passion and happiness, they’re buying a home and moving in together. Everything is rosy for them—until a jealous and insane ex from Wade’s past puts all of that to the test.

After being kidnapped and tortured by his deranged former lover, Wade loses his ability to engage with his own sexuality or with Russ. With the help of a psychologist, EMDR therapy, and a sex plan, they work together to overcome the damage inflicted. In the process, they discover wells of love they’ve never known before.

Dark, and yet ultimately hopeful, this book contains many emotional and graphic sex scenes, as well as some scenes of torture. This book deals with rape and rape recovery. Proceed with care.

Review: Wade is on a trip to LA to visit a long-time friend/former lover, Owen, when his life is seemingly irrevocably changed. Wade and Owen had been together previously, but Owen, who was a closeted bisexual, never came to terms with his attraction to men. Owen and Wade maintained their friendship until Owen moved away. But, Owen basically went off the deep end, decided to kidnap Wade and torture him as a means of cleansing him of his current lover, Russ. Owen was in a deep psychotic episode throughout the ordeal, and while that helps explain things, it certainly doesn’t excuse his actions.

But, the main story here isn’t actually the kidnap/torture/rape that Wade endured, though that is a big part. It is mostly contained in chapters 2/3 which could technically be skipped if you are unable to handle it, but there are references throughout the rest of the story that give hints as to some of what Wade endured. This is one of the things I loved about the way this story was told. While we get a good chunk and general sense of what took place in current time during the kidnapping, it is during the months following his kidnapping, after Wade his healed physically, but throughout much of Wade’s healing process that we are fed some of the details. It gave a sense that this was not something Wade would simply heal from like a bruise or broken bone, but something that he may well have to always deal with on some level.

The bulk of the story is about Wade healing and finding ways to cope and come to terms with what has happened. He and Russ take baby steps to help Wade get by with fewer episodes, find ways to do every day things without triggering anything, and most of all, find ways for Wade to enjoy being together sexually (though Russ never pushes and is happy with however much Wade can or wants to do). It is often Russ who has to be strong when Wade wants to push too far. Wade’s psyche had been forcibly trained one way where he endured extreme pain but also unbelievably intense orgasms for fear dying. To say he had some serious issues to overcome in being able to have “normal” sex again, is a vast understatement. But, this story feels very realistic in that healing process. Wade takes many steps back, there is no quick fix, but he is lucky to have a strong support system and a man that loves him more than anything to help him through. He chooses a different approach in his therapy which I found intriguing but easy to understand understand and interesting to watch unfold.

All in all, I really enjoyed this story, the way it was told and how smoothly it read. It contained a difficult subject matter, but was never over the top. I also loved that it was romantic at times but never felt fluffy or cheesy. I wish we had learned a bit more about Wade and Russ’ relationship before the big event, but I never had any doubt about their commitment after it happened. I was a bit disappointed to find this is the first book by this author, as I was eager to jump into another story, but I will definitely be on the lookout in the future.