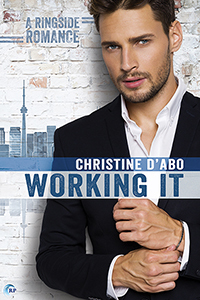 Blurb:  Nolan Carmichael is getting a fresh start—new career, new company, new life. The only problem is, he liked his old life just fine . . . until an accident robbed him of his health, his job, his self-confidence, and his ability to go out in public without having anxiety attacks.

Zack Anderson has scared away his last four administrative assistants. So when he hires Nolan on a whim, he’s not too worried, since Nolan will be gone within the week anyway. Two weeks later, Nolan has made himself indispensable, completely reforming Zack’s schedule, life . . . and libido.

But in a company already torn by internal politics, one wrong step could ruin both their careers. And not only are they working to reopen Ringside Gym, Zack’s retreat when he was a troubled teen, but they also can’t help themselves falling for each other. If only the rest of their lives could go as smoothly as things do when they’re alone together.

Review: Zack has worked hard to get where he is. He works best alone and has been through numerous assistants due to his gruff demeanor and anger management issues. That all changes when Nolan appears.

Nolan had his life turned upside down when a car accident left him lucky to be alive. It has taken two years of recovery to get to the point where he feels he is able to interview for a job, albeit not in his chosen field, which he is no longer able to do due to his anxiety and PTSD issues. He soon finds out tackling the interview was the easy part. But, as damaged as he feels he is, he has great strength in dealing with the difficult Zach, and in doing so, starts to see beneath the many layers to a man who cares a great deal about many things.

There are definitely some bumps in the road as these guys navigate their working relationship and general attraction toward one another. Zach is working with the goal of being able to renovate and reopen the boxing gym he purchased. This is the basis for the series, although it is only in its beginning stages. The gym played an important role in Zach’s (and his bff, Max) childhood as a safe place for LGBTQ youth and a means for Zach to handle his anger issues.

I really enjoyed this story. We aren’t given too much information about Zach’s past, we definitely get to learn about the man himself. It is easy to see Nolan’s effect on Zach, and the two have great chemistry. Zach is able to calm Nolan with his anxiety, and Nolan manages to organize and bring a calmness to Zach’s hectic life. There were some really cute moments and definitely some sexy ones as well. This was a solid foundation for what looks to be a very enjoyable series. I believe Max’ story is next, and I can’t wait to see what’s in story for him!