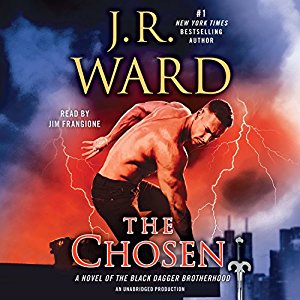 Blurb: Xcor, leader of the Band of Bastards, convicted of treason against the Blind King, is facing a brutal interrogation and torturous death at the hands of the Black Dagger Brotherhood. Yet after a life marked by cruelty and evil deeds, he accepts his soldier’s fate, his sole regret the loss of a sacred female who was never his: the Chosen Layla.

Layla alone knows the truth that will save Xcor’s life. But revealing his sacrifice and his hidden heritage will expose them both and destroy everything Layla holds dear—even her role of mother to her precious young. Torn between love and loyalty, she must summon the courage to stand up against the only family she has for the only man she will ever love. Yet even if Xcor is somehow granted a reprieve, he and Layla would have to confront a graver challenge: bridging the chasm that divides their worlds without paving the way for a future of even greater war, desolation, and death.

As a dangerous old enemy returns to Caldwell, and the identity of a new deity is revealed, nothing is certain or safe in the world of the Black Dagger Brotherhood, not even true love . . . or destinies that have long seemed set in stone.

Review: I really did not expect to the love this book as much as I did. I even groaned when I’d heard last year that Layla’s book was next, even though I really wanted Xcor to get his happy ever after. I know it sounds like I am at odds with the pairing, and I am, and I’m not. I will explain…

First off, I think the fact that I listened to the audio, as opposed to reading the book, made this particular story all that much better. Jim Frangione has been stellar in his narration of this series and he just keeps getting better. How he maintains such a wide repertoire of characters, and keeps them all separate for the listener, is brilliant. He also has this amazingly deep voice that is perfect for this series.

I must say that my favorite scene was the Qhuinn and Layla showdown. I was in my car, driving to work during horrendous traffic, but I was so animated during that scene that other drivers must have thought I was having a seizure. Jim Frangione was on fire with the emotion outburst and I loved it. I felt like I was in the same room with them, and was cheering Qhuinn on because Layla was finally getting what she, in my mind, deserved. I even called fellow blogger girl, JustJen, and went on and on about how awesome it was. Finally, perfect Layla was not so perfect anymore…and I freaking loved it.

What I didn’t love was Blay taking Layla’s side. That kind of irked me a bit. As much as I wanted Xcor to get rid of all the hurt and pain from his past, I thought Layla got off way too easy and was forgiven way too soon. I really wanted that to drag out for at least two or three books. I mean, honestly, she came between Qhuinn and Blay for multiple books and so it was only fair, right?

I was thrilled that Tohr and Xcor…(huh, just realized their names rhymed) were settled and they were well on their way to being real brothers. My heart was so happy for both of them. Thankfully they didn’t kill each beforehand, and it came really close. I was also loving the dynamics with Jane and V. I read many reviews where readers were not thrilled with their marital discord, but to me, it just made sense. Humans aren’t always on the same page, and neither are vampires. A perfect life is, well, boring. I have no doubt their relationship will remain intact, but I also know they are in for a bumpy ride, too.

We get to the bottom of many of the storylines that were left open from previous books, and I was pleasantly surprised that so many were handled with relative ease, and some were resolved, in this book. Not 100% sure on the Trez and Thes/Selena deal but I will let it play out. The guy was crushed in The Shadows and if Jane can be a ghost, and Darius can be JM, then maybe Selena can return, too.

Again, I must reiterate how great Jim Frangione performed this extra long novel. Over 17 hours of audio performed brilliantly and kept me captivated. I seriously could not put it down and that is the mark of an amazing book performed magnificently by a very talented narrator.