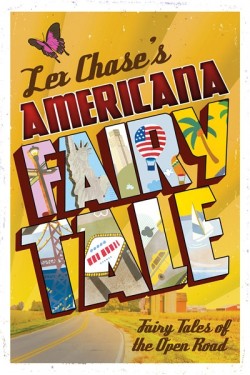 Blurb: Modern fairy-tale princess Taylor Hatfield has problems. One: he’s a guy. Two: his perfect brother Atticus is the reincarnation of Snow White. Three: Taylor has no idea which princess he is supposed to be. Four: Taylor just left his prince (a girl) at the altar. Despite his enchanted lineage, Taylor is desperate to find his Happily Ever After away from magic, witches, and stuffy traditions. Regrettably, destiny has other plans for him. Dammit.

When word reaches Taylor that Idi the Witchking has captured Atticus, Taylor is determined to save his brother. He enlists the help of rakish and insufferable Corentin Devereaux, likewise of enchanted lineage. A malicious spell sends Taylor and Corentin on a road trip through the kitschy nostalgia of roadside Americana. To save Atticus, they must solve the puzzles put forth by Idi the Witchking. As they struggle, Taylor and Corentin’s volatile partnership sparks a flash of something more. But princesses have many enemies, and Taylor must keep his wits about him because there’s nothing worse than losing your heart… or your head.

I’m at a loss on how to review this book. On one hand, I really enjoyed this one and the twists and turns there is. But on the other hand, I had a lot of issues with it. Let’s start with the characters. I adored Taylor as a character. At first, I wasn’t really feeling him because I felt like even though Taylor was a guy, he acted like a girl, totally embracing the ‘princess’ title even though he hated being labeled a princess. It was a little aggravating but as the story progressed, I started to adore him and his quirkiness. The fact that he couldn’t seem to get a break and kept getting himself into awkward situations was just too cute.

Corentin was a bit of a mystery but I grew to like his gruffness and how cryptic he was. I liked that his curse caused him to have such a huge journal and I liked that even though he was in a bad position, he couldn’t help but develop feelings for Taylor. I also really liked his curse and it was interesting to see him struggle with wanting to tell Taylor and keep it a secret. He was definitely my favorite character.

While I really enjoyed this story, when I got to about 40% it just started to drag. It felt like the same thing over and over (which it kind of was) and I just got tired of it. It was a struggle to keep reading. On top of that, the story starts off with a lot of information and questions. Even at the end of the book, I still didn’t get answers. For instance, how is one determined if they’re a princess or a prince? How is it determined which princess or prince they are? Why was it okay for Taylor’s parents to both be princesses but not okay for him to be a gay princess? How did no one know that his line continued to have princesses? Why would no one help Taylor and Corentin? Gosh, I just have so many questions. Add to that, I really didn’t like the ending…. well I did but it was just so open-ended. After that entire novel (a HUGE one), I felt like the story should have been much farther along and should have answered way more questions for how long it was. There should have been a good amount of conclusion to it but there wasn’t so I was a bit disappointed with it.

In the end, I won’t deny that I did enjoy the story. I loved the characters and I did ultimately enjoy the journey they went through to overcome their obstacles but I felt like for such a monster of a book, we should have gotten a lot more answers than were given. I’m not sure if I want to continue reading the series, though, considering how confused I still am after 300+ pages. But readers should determine that for themselves if they want to try this one. It IS an interesting story so I do encourage readers to at least try it.