Audio Review: Faking It by Riley Hart and Devon McCormack 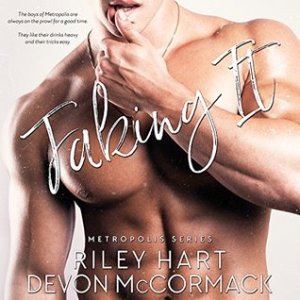 Blurb: There’s never a dull moment at Metropolis…the condominium known for having the hottest openly gay tenants in town. The boys of Metropolis are always on the prowl for a good time. They like their drinks heavy and their tricks easy.

Gary should be living it up in his South Tower unit of Metropolis, but he’s having a hard time adjusting to his newly single status. It’s not easy to walk away from five years with his ex, who he discovered was cheating on him with some North Tower twink. After a night out partying, licking his wounds, he goes to bed alone. When he wakes the next morning, there’s a naked guy in his bed. Not just any guy. A stud from North Tower. But hot as he is, what the hell is he doing in his room?

Travis Waller doesn’t get why Gary’s freaking out. So he went home with Gary’s roommate and accidentally crawled into the wrong bed. It’s not the first time he’s woken up in a strange place. Maybe Gary would loosen up a little if he gave it a try as well. Travis has more important things to deal with though…like his meeting with an investor who could give him the money to start his massage parlor.

They’re both sure that’s the last time they’ll have to deal with each other until a mix-up leads Gary’s ex and Travis’s investor to think they’re an item, which Gary and Travis use to their benefit by posing as a couple around town. Soon, they discover the chemistry between them is off the charts. Travis brings out a sexual confidence Gary didn’t know he had—one Travis enjoys exploring with him. But as the two keep up their boyfriend hoax, Gary realizes Travis isn’t as shallow as he thought. Gary’s starting to develop feelings for him. But Travis doesn’t do relationships, and Gary should know better, considering they’re just faking it…

Review: So, okay, I started this audio thinking maybe it wasn’t for me, yet by the end I couldn’t stop listening and didn’t want it to end. There is a lesson here, folks, and that’s to give your books and audios a real chance before you throw in the towel. I am not sure what threw me off at the beginning. At first, I thought maybe it was the narrator’s voice, but I loved his Travis performance, so much so that I wanted to find a real life Travis to befriend. In the end, I just stopped worrying about analyzing it and just started to enjoy it. Sometimes, we just need to sit back, listen, and trust the authors and narrators to take us where THEY want us to go.

Metropolis is like a gay soap opera. So many parts were so over the top that I just shook my head, but at the same time, I could actually see a lot of this really happening. I think sometimes readers want a lot of feminine-like qualities in their protagonists, but men, whether straight or gay, are still men. I think that’s one of the things I liked about this one. There were many times the dialogue could have turned into a bunch of jealous and hurt feelings for our guys while they were “faking it” but it was refreshing that they allowed so much to roll off their backs. Until they start to acknowledge that maybe they aren’t faking it anymore.

This was kind of a slow burn romance with lots of raunchy sex. I think I surprised myself with how much I really enjoyed that. I also loved the Travis transformation and the way his brothers came to his defense. Knuckle bumps to Martin and Malcolm…the greatest siblings in a gay romance novel ever. However, it wasn’t only Travis who transformed and settled his wild ways. Gary transforms from a self conscious and self-deprecating caterpillar and blossomed into a sexual beast…and Travis calling him Super Ass was funny as hell.

This was my first time listening to Michael Pauley but it won’t be my last. This guy puts his all into the performance and I am pretty sure he improvised a bit, but it worked, and worked well. You can tell he gave this story his all and it translated into this reader having one hell of an amazing experience.

*I received a copy of this book from the authors in return for a fair and honest review.*