Book Review: By the Numbers by R.J. Scott 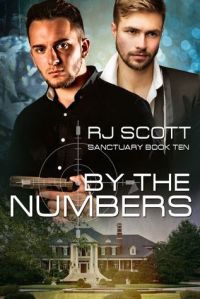 Blurb: The final book in the Sanctuary series.

Brandon Hoselton is running scared, finding security in his obsession with patterns and numbers. With his family threatened, he feels he has nowhere left to go, and even considers ending his life to keep them safe. Until Sanctuary, in the shape of the enigmatic Daniel Karnes, gives him a reason to stay alive and offers the possibility of a future free from fear.

Former SEAL Daniel is new to Sanctuary, tasked with watching Brandon, a brilliant geek with way too many secrets. Falling in love with quirky Brandon is easy; now he just has to make sure secrets don’t end up with them both dying.

The only way of destroying Varga is to cut the crime boss’s money, and the two men become part of an intricate take-down involving millions of dollars. But Brandon has a secret he can never share with Daniel, and their new love is at stake.

When the villain has murder in mind, sometimes the only way to stay alive is to lie.

Review: I really loved the Sanctuary series and the first nine books were all 4 and 5 stars…so I was a little bummed that this one did not resonate with me as much as the earlier books did. I am not sure why that is, but I think maybe it had to do with not connecting with Brandon and Daniel as much as I was able to connect with the earlier couples. I also think maybe it had to do with the martyrdom that Brandon was wielding, that to me could have been much easier settled if he had just told the Sanctuary operatives the truth. But whatever it was, it doesn’t take away from the rest of the series, or the great writing ability of R.J. Scott.

For the most part, I love special ops and strong alpha males saving the day…along with the victims. This book involved a very complex victim in the form of Brandon. He is numbers guy who struggles to get out of his own head. Daniel is the muscle who wants to be the hero, and more, for Brandon but he can’t quite figure him out, even though he tries his best. What I loved best about Brandon was his lack of a filter and his constant habit of saying things before he thought them out. It took a complex man and made him more human. What annoyed me was his sisters. If I am in witness protection, the last thing I am going to do is nag about the internet or otherwise being a nuisance. They were annoying, but they were why Brandon played the martyr card, so they were relevant to the plot. Sisters! It explains why I live so far away from mine, lol.

Probably my favorite parts was seeing the guys from the previous books. This series is one of my favorites and just because the last book didn’t ring all my bells doesn’t mean it’s not a good book. It’s the opposite, actually, the series is so good that you come to expect nothing but the best, even though we all know you can’t please everyone all of the time. And for that reason I still highly recommend this series and this book to everyone.