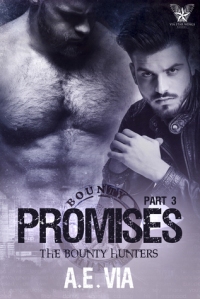 Blurb:  A bounty hunter’s partners to lovers’ story.
The hunt is on… and he’s the prey.

Bradford (Ford) King was sure he had the rest of his life mapped out. Though he was no longer a SEAL Lieutenant, his brother was home safe and he had a job that still allowed him to satisfy his hunger for hunting bad guys. Life was simple, no distractions or complications – at age forty-six – that’s all Ford wanted. What he didn’t want was his work partner, sniper/watchman, Dana, giving him s**t all the time.

Dana Cadby had grown up labeled a roughneck from the wrong side of the tracks. He’d fought, scrounged, and survived despite a father that constantly told him he couldn’t. Dana pulled himself up by his own boot straps and made a name for himself in the marksman community. He’d been Duke’s bounty watchman for five years. It was his job to ensure their safety, watch their backs. At thirty-three, he was trusted, well respected by his peers, his bosses, his friends… so why couldn’t he earn the same respect from his partner?

Dana knew he was bisexual before he graduated high school. He also knew he was attracted to the huge, 6’3”, SEAL from the moment he and his brother came to join their team. It wasn’t easy for him to tamp down his immediate reaction to Ford’s thick muscles, full beard, and dark eyes. Still, Dana exhibited nothing but professionalism towards him, not wanting to make his ‘straight’ partner uncomfortable. So why did Ford constantly give him hell?

After Dana took back his ex-girlfriend, he’d noticed an intensification in Ford’s bad attitude. One that turned aggressive and downright antagonistic, and Dana was damned if he’d just lay down and take it. He was gonna make that man respect him if it was the last thing he did.

When Duke sends Dana and Ford out to track down their most dangerous bounty yet, they both embrace the fact that they make one hell of a team… but they fight tooth and nail against the powerful intimacy brewing between them.

Beware: If Ford and Dana connect completely, god help the fugitive who’s in the sights of the hunter and his watchman.

This story is a part of a series but can stand alone. It does not end on a cliffhanger and has a HEA.

Review: For some crazy reason, I missed this series. As this one stated it was a stand alone, I figured I would jump in. I had no trouble following along with who was who or the makeup of this group. Dana and Ford are Bounty Hunter partners who work for men whose stories are told in the previous two books, which I am definitely going to go back and read!

Anyhoo, Dana and Ford are interested in each other, or were interested, but never let it be known. So, since Dana felt he never had a chance, and not wanting to be alone, he engaged in an on-again/off-again relationship with a woman who ended up not being very good for him. She thought she was better than him (and most people) and was always trying to make him better, though she loved the bad boy image in the bedroom. But, of course, it was all about her.

Meanwhile, seeing Dana with her only gets Ford riled up to where he is actually finally confronting his own feelings about Dana. When things heat up at work, they are forced to confront the elephant in the room. It takes some time before they get on the same page, but you can definitely feel the explosive chemistry between these two.

Before they get much of a chance to move forward with any type of relationship, the job really takes over as they hunt down some pretty big bail jumpers. Things get a bit of a chance to progress during the surveillance stage, but when they are in the midst of all the danger, they realize how much they actually mean to each other.

This was a well written story that had a lot of action and kept me turning pages quickly to get to the end. Ford and Dana were smokin hot together, and I really enjoyed watching them find with one another what they were missing in their lives.

This had some great side characters as well, and two of my favorites where Brian, Ford’s younger brother, who is also a bounty hunter but suffers from selective mutism due to something that happened while in the military; and Sway, Dana’s bff, who has been keeping to himself while caring for his mother. These guys end up meeting and the finding each other again, making me extremely eager to jump into their book. They seem perfect for each other, and I can’t wait to see their relationship unfold.