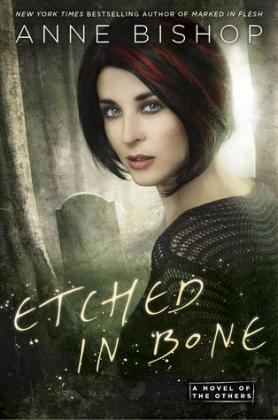 Blurb: After a human uprising was brutally put down by the Elders—a primitive and lethal form of the Others—the few cities left under human control are far-flung. And the people within them now know to fear the no-man’s-land beyond their borders—and the darkness…

As some communities struggle to rebuild, Lakeside Courtyard has emerged relatively unscathed, though Simon Wolfgard, its wolf shifter leader, and blood prophet Meg Corbyn must work with the human pack to maintain the fragile peace. But all their efforts are threatened when Lieutenant Montgomery’s shady brother arrives, looking for a free ride and easy pickings.

With the humans on guard against one of their own, tensions rise, drawing the attention of the Elders, who are curious about the effect such an insignificant predator can have on a pack. But Meg knows the dangers, for she has seen in the cards how it will all end—with her standing beside a grave.

I’ve loved this series since I first read it a few years ago. I’ve re-read it probably a dozen times and each time it just gets better and better. But when I saw this was the last book for Meg and Simon? Oh man, my heart BROKE. I wanted to read it but…. I didn’t want it to end 😦
So needless to say, it took me a while to start this one because I didn’t want to accept it would possibly be the last book we read in this series. THEN I saw there was a spin-off and I felt a little better about a conclusion to Meg and Simon EVEN THOUGH I still don’t want them to end 😦
Now, as with all the other books, I won’t go into too much detail about this one because I don’t want to give away any spoilers. What I will say is this one deals a lot with Monty’s family and having his brother come into town. At the same time, while Simon knows Monty’s brother is trouble for the Courtyard, he can’t force him out because some of the Elders want to see how to tell the difference between good humans and bad.
It was interesting to see the development in this book because of the way the last one ended but I also found it interesting to see how certain things would be wrapped up. I loved how Meg was becoming more and more attune to her prophecy cards. I liked that she was making an effort to understand and interpret the cards instead of just cutting when she got a bad feeling.
What I loved the most was OF COURSE Meg and Simon. I felt like a lot has changed in their relationship and, while they weren’t IN a relationship, they pretty much were a couple. They lived together (even though they had separate apartments), they went to work together, they CARED for each other. I loved that they knew there was something more between them but they weren’t sure how to go about making it happen or even if it would mess up their relationship if they explored that part of things but seeing Simon realize that everyone already thought of them as mates and him not sure if they should be, was so sweet but also a bit funny.
I honestly think the only way this could have been better is if Meg and Simon kissed some more! The part when they give it a try was the sweetest moment ever. Actually, there were a ton of super sweet moments in this one. Such as when Simon tries to do something nice for Meg and it doesn’t go as smoothly as he hopes, just made my heart go all aflutter!
Anyway, I could gush and gush about this book till I’m blue in the face! So I’ll leave things with this: I loved this series and each book just got better and better. It could go on for another ten books and I would still love this series simply because this story has so many well developed characters who are not only funny and sweet but ferocious and deadly. The world itself is filled with twists and turns and I was so engrossed in seeing how everything changes and how everyone develops, that I couldn’t get enough.
I loved seeing friendships and romantic relationships develop. Seeing the way cassandra sangue started and how they’ve ended up and how it all started with a little blood prophet named Meg who just wanted to be free and how Simon made an exception and let Meg worm herself into his life. Now? Simon can’t live without Meg and Meg would be lost without Simon and seeing them finally take that last step and realize that they’ve been denying the fact they’re mates this whole time, made the series end on a good note for me.
Granted, I can’t wait to read the spin-off and, of course, I wouldn’t say no to another story about them because I really hope this won’t be the last we see of Meg and Simon but I feel like them and everyone in the Courtyard are in a good place now. Definitely give this a go if you’ve been reading the Others series and enjoyed it but if you haven’t started this series yet? Then what are you waiting for?! There’s so much in store for you and you’re going to LOVE IT!