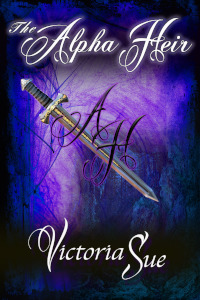 Blurb: Man and wolf. Sworn enemies in the battle for Askara. Can hate and betrayal ever lead to love?

Caleb Harken has spent six years wrongfully imprisoned for his father’s treachery. Tortured and reviled by the very wolf pack he should have been leading as Alpha, he is not surprised to learn he’s finally to meet his death at the hands of the human rebel leader, Taegan Callan.

Taegan gave up his dreams of a life-mate and a family after seeing too many humans butchered at the hands of the wolves—even if Caleb doesn’t seem to be the bloodthirsty savage he expects, and even if he starts to long for a different kind of future with the wolf.

Can Caleb become the Alpha he was always meant to be and lead his pack, or will he finally realize that winning his freedom means nothing when he has already lost his heart?

Review: This story takes place in the same world as The Alpha King, though in a different territory. While I think would be helpful to have read The Alpha King first to get a full helping of the worldbuilding here, I don’t believe it is really necessary, though I definitely recommend it, as it was a fabulous story. This book gets you up to speed though, and we do get to see Luca, The Alpha King, make an appearance at the end.

This starts right off the bat as quite a heartbreaker, as we learn about Caleb and his captivity as he is brought front and center as a pawn for a power play. There were lies and betrayals that led to this point, but suffice to say the evil Uncle (and cousin) are a the heart of Caleb’s problems and the sole cause of his wanting to end it all. He has suffered so greatly for so long, something of which is totally unheard of, by the way, that he just wants it to all end. When he finally sees that chance, things don’t turn out quite the way he had hoped, and he ends up as the captive of a new tormentor, the human rebel leader, Teagan.

Teagan has his reasons for hating the wolves that stem from back to his childhood. Granted, most of his interactions, with the exception of Silas, have been horrific, and he has seen the wolves do nothing but treat the humans deplorably. In an attempt to rescue two children who’ve gone missing, he and his men are captured and he is then forced to fight Caleb, who he thinks is another wolf. But Caleb is not what he seems, which they all figure out once Teagan escapes taking Caleb with him in hopes of using him to again attempt to rescue the kids. Things change pretty quickly for Teagan and Caleb once Caleb accidentally bonded with Teagan, and the abruptness of his turnaround threw me off a bit, but in the world of shifters, it didn’t seem all that abnormal.

When new opportunities arise from everything they all learn, things seem to have the potential to change for the better where the humans/werewolves are concerned. The focus changes for Teagan and his men, and Caleb is at the heart of it all. Unfortunately, they hit more bumps in the road before things get better, but the ending is worth it. This is a really interesting world Ms. Sue created, and I’m really enjoying the details involved, as much as the relationships. While there is an undertone of mpreg, it doesn’t take place in this segment, so don’t let that scare you off if it isn’t your thing. Or, if you are looking for that specifically, you might want to go back to the first book, where it actually takes place, but regardless, this is a wonderful story, and I’m really looking forward to seeing it continue.