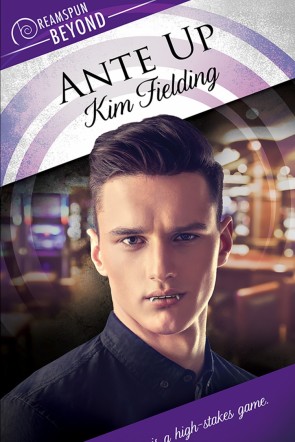 Blurb: Love is a high-stakes game.

A century and a half ago, Ante Novak died on a Croatian battlefield—and rose three days later as a vampire. Now he haunts Las Vegas, stealing blood and money from drunken gamblers and staying on the fringe of the powerful vampire organization known as the Shadows. His existence feels empty and meaningless until he meets beautiful Peter Gehrardi, who can influence others with his thoughts.

An attraction flares instantly, bringing a semblance of life to Ante’s dead heart. But the Shadows want Peter too, and they’re willing to kill to get him. As Ante and Peter flee, they learn more about themselves and each other, and they discover that the world is a stranger place than either of them imagined. With enemies at their heels and old mistakes coming back to exact a price, how can Ante and Peter find sanctuary?

Ante’s lived a long time as a vampire and he’s reached the point where his life is a bit empty while living in Las Vegas. But then he meets Peter and finds him fascinating, watching him as he plays the casinos and people in them. He can’t help but be drawn to the charming man. So when the Shadows hire Ante to bring Peter to them, at first he’s willing to do it but the more time he spends with Peter the more he realizes he can’t let them have Peter especially when Ante finds out what Peter is. What ensues is an adventure as Peter and Ante run for their lives, trying to find a way to evade the Shadows. With the Shadows just one step behind, will they be able to find a place where they can call home and be free from the Shadows for good?

This one is really hard for me to review because I wasn’t feeling this story very much in the beginning. It was hard for me to really get into it because I couldn’t connect with Ante and this story is just from his POV. I liked him okay as a character at first but he was a bit dull and kinda robotic as in he did the same thing over and over.

For a majority of this story, I was just waiting for the next thing to happen. I almost put the book down several times because nothing really does happen and that’s the biggest complaint I have. I mean, sadly, I was thinking what I’d be reading next or what other story I could read if I put this down. I hate that I did that but I wanted to finish this book… but then I didn’t want to finish it. It was an odd feeling but it was just so hard to stay interested when not much happens. Peter is an intriguing character but Ante is just so simplistic and going through the motions and that made the story stagnant to me.

And then…. it picked up! Yes, it wasn’t until around 60-70% but I LOVED how fast-paced and adventurous things got. That moment when Peter and Ante realized that they were going to see this fight through and they weren’t going to leave each other really brought the story up in my eyes. Plus, that was when things stopped being all ‘one-night stand’ and turned into ‘this could possibly be my ever after’ type thing. A little corny I know but I love these stories for how cheesy they can be at times. Plus, I loved loved loved Peter as a character. I mean both Peter and Ante have a bit of nobleness to them but Peter was so spunky and sassy, I adored him.

In the end, I loved the ending but the beginning and middle just didn’t have enough oomph to keep me interested in the story as much as I would have liked to be. I loved Peter as a character but Ante never got to that point for me. I loved them together and I really adore where they ended up but I think the author would have benefited better by having POVs from Peter to even out Ante’s more somber voice.