Book Review: Not Just For Christmas by Annabelle Jacobs 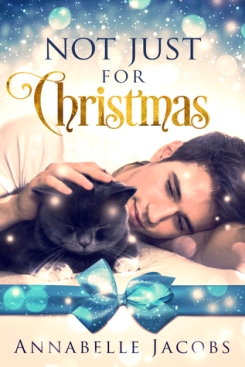 Blurb: Ben has Christmas, cats, and mistletoe on his side…. Jason doesn’t stand a chance

For Ben Slater, moving back to Bristol means being closer to his family, living with his best mate, and volunteering at the local animal shelter. But there’s also Jason, his best mate’s eldest brother. Ben’s had a crush on Jason for as long as he can remember, but the eleven-year age gap has always seemed insurmountable.

Jason Armitage works as a vet at his uncle’s practice. He owns a cute cottage on the outskirts of the city, and a loving dog. The one thing missing is someone to share it all with. His brother’s best friend seems a bad choice, but Jason can’t help taking a second look. Ben’s changed a lot since Jason last saw him; both in appearance and attitude. Gone is the shy young boy, replaced with a confident, twenty-four-year-old man.

In the run up to Christmas, the festive period gives Ben the ideal opportunity to show Jason what he has to offer. But concerns for his brother’s feelings hold Jason back. If they have any chance of making this work, Ben must convince Jason that he’s old enough to know what he wants, and Jason needs to believe that a relationship with his brother’s best friend won’t ruin their friendship.

Ben has had a crush on his best friend’s brother for years. Now at twenty-four, he’s sure he’s over that crush…. until he moves back home and sees Jason again and realizes how good Jason looks at thirty-five. There might be a bit of an age gap between them and while Ben doesn’t mind, Jason struggles with starting to find his brother’s best friend suddenly attractive. But Jason is looking for something permanent and he’s not sure Ben is ready for that and Jason’s worried about how his brother will feel with Ben and Jason being together. Will they be able to work through their concerns or will their relationship be over before it even begins?

This was such a cute story. First of all, brother’s best friend or best friend’s brother (whichever way you want to look at it) is one of my favorite tropes. I mean, how could you not love the little angst and the little longing looks and sighs when the other walks on by while you’re hanging with your best bud? It’s such a sweet premise that I fall for it every time and this one was no different!

I adored Ben right from the start! I loved that he still had such a crush on Jason and that everyone knew about it. I mean, Ben’s grown up since he really last saw Jason and he’s become more confident but when Jason’s around, he still gets a bit shy. As for Jason, I loved that he was so settled in his life. He was a solid presence and his love of animals just had my heart melting for him. When he starts to notice Ben as someone other than his brother, Liam’s, best friend, I started to get giddy over their attraction. The chemistry between them was just so hot, I could have happily read 100 more pages about them!

I really enjoyed this book but I felt like there was something missing. The pacing is done really well but I was a little disappointed in the end. Most of the book is about Ben and Jason dancing around their attraction but very little of the book is actually about them together. I would have liked to see more of that instead of just the lead up. I mean, we get a little as an epilogue, but it’s more telling of where they are instead of seeing them together.

In the end, this was a very sweet, sorta slow-burn story about Ben who’s had a crush on Jason for years and Jason finally noticing his brother’s best friend as someone more than just a kid. It was sweet seeing them try to not notice the other and even sweeter when they actually acted on their feelings. Definitely give this one a go if you’re looking for a feel-good type of story.