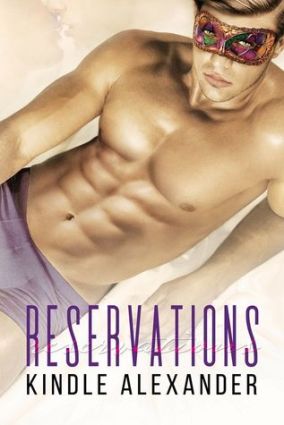 Blurb: Wildly successful entrepreneur, Thane Walker is stubbornly set in his ways and adamantly resists the shackles of commitment. He’s seen enough unhappy endings to learn the best way to play is by keeping his men on the payroll.

Levi Silva’s dream of graduating from one of the country’s top medical schools is in his grasp, until news from home changes everything. Now, he’s raising his two teenage brothers and trying to keep everyone’s head above water, emotionally and financially.

When Levi’s new job puts him in Thane’s path, their chemistry explodes, but their fear of being involved in relationships keeps them apart. Unfortunately, despite the intense desire drawing them together, neither man can move forward until they get past their own…Reservations.

I normally love this author duo, but it took me forever to finish this one. The story itself was really good, but it just seemed a bit choppy to me and was just a lot of the same things happening over and over again. Wash Rinse Repeat, and I believe I would have loved it if it was a little shorter. Very odd for me to say that, but halfway through when nothing appeared to be settling, I got….bored. I have never been bored with a Kindle Alexander book, but there you have it.

Now, don’t let the above paragraph fool you, this is a really good story with a great ending. And like most Kindle Alexander books, it is always nice to check in on the characters from previous books, and they make quite a few cameos in this one, too.

Thane is a rich, arrogant, bad boy who always gets his way, and whatever man he wants for the night. Levi is poor, raising his younger brothers, and will do whatever it takes to give them a decent life…but he draws the line at being paid for sex, no  matter how much he needs the cash. The problem for Thane is that he doesn’t take no for answer, he doesn’t do relationships, and he pays for sex, and the problem for Levi is that he needs his job at Reservations, which is owned by Thane. In the real world, Thane would be in court over and over again for his lack of business decorum, but then again, who knows. Many men would line up to sleep with Thane…and take the cash, too.

Levi is just a good guy who was dealt a terrible hand. He was in school to be a doctor when he had to drop out to raise his brothers. His mother abandoned the kids when they were little, and then comes back when she realized there is some money to made off their fathers deaths. She was a horrible person, and I am still unsure how I feel about her getting money in the end. I really hate when the bad people win, and in that case, even though the end result was that she was out of their lives for good, I still felt like she won. Ugh.

But, bad boy Thane comes through at the end. He really was a victim, sort of,  himself and  he needed to change how he viewed relationships, and that he was making himself a victim because of his own parents. The kicker was that it was all an illusion. That was a weird twist, but I will give the authors an A for originality. In the end though, I really enjoyed the story and I am sure most of these authors fans, will too.