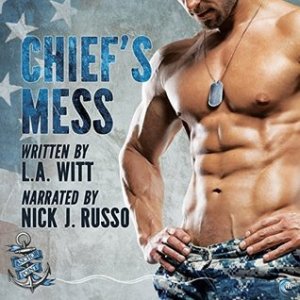 Blurb: Anthony Talbot is in Anchor Point to visit family, but after two days of strife, he needs a break. A local gay bar is calling his name.

When Chief Noah Jackson sees that red head stroll into the club, he immediately wants him. They’re perfectly matched, and before long, they’re burning up the sheets. Noah can’t get enough. Anthony can’t stay in Oregon for long, but as soon as he leaves, he’s counting down the days until he can fly back for more. And between his increasingly frequent visits, there’s always phone sex, sexting, webcams . . . anything they can get.

But Noah’s got a carefully crafted façade, and Anthony can’t help noticing the slowly forming cracks. The scent of alcohol in the middle of the day. The extra drinks at dinner. The hint of red in his eyes. Anthony knows what it means. He doesn’t want to believe it, but he’s seen this before, and there’s no denying it. If Noah doesn’t get his downward spiral under control, he’s going to lose both his career and the first man he’s ever really loved.

Review: I love this series, I love this author, and I love the narrator…but I didn’t love this installment. I think the problem was that there was literally too much sex for me to be able to connect with either Anthony or Noah. They meet as hook ups, and they continue to fly back and forth between Denver and Portland just to have sex. I love sex, they really love sex (and do it soooo well) and I know their relationship was meant to be just about hook-ups and not feelings, but it was just a bit much for me. I did love when they started becoming boyfriends, that was awesome seeing them connecting and watching their feelings blossom.

Nick J. Russo kept me vested throughout, and by the end I was really getting into it. I knew that alcoholism was the theme, and I knew it would eventually rear its ugly head, and when it did, I was all in. Finally getting somewhere with these two sex fiends. The performance of a drunken Noah and a pissed off Anthony was near palpable. I listen to audios in my car, and I ended up sitting in my garage for awhile because I was at a part that I could not turn it off. So, this was quite a quandary for me to review as parts were top-notch and other parts dragged a bit. But by the end, I was all in and enjoyed myself enough that I find myself eager for the next book.