Book Review: The Architect and the Castle of Glass by Jade Mere 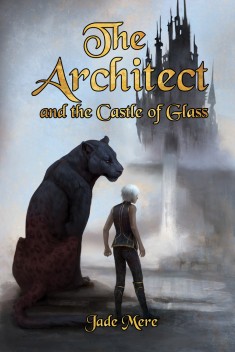 Blurb: Chasing his dream will send him into a dark and twisted nightmare.

Tahki’s only goal is to become a world-famous architect, even if that means betraying his father’s wishes by abandoning his comfortable life for one of unpredictable danger.

After Tahki blindly accepts what he thinks will be a dream job, his skills as an architect are put to the test as he is given the bizarre—and slightly unethical—task of turning a remote castle into a new-age machine for Prince Dyraien. The castle provides a challenge unlike any he’s had before, and Tahki finds the only way he’ll be able to succeed is to swallow his pride and work alongside Rye, a guarded young man who is quick to see the flaws in both Tahki and his work.

Yet the looming deadline proves to be the least of Tahki’s troubles. When a horrifying creature begins to haunt him, Tahki turns to Rye for help. The more he learns about the history of the castle, the more terrifying the hauntings become. Even with Rye by his side, Tahki realizes achieving his dream might send him down a dark path from which he can’t return.

Takhi has a dream that one day he’ll become a world-famous architect and everyone will know his name. He tries to prove to his father he’s a talented architect but just ends up botching his designs. When he runs away to enter a competition, he’s sure he’ll win and prove to his father just how great he is but when he loses, his dreams are crushed. Until he gets the offer of a lifetime, one that’s so secret he really doesn’t even know what it is until he accepts the job. Now he’s working for Prince Dyraien on making a castle into a weapon. The pressure is on especially when he has to answer to Rye in all his designs. As the deadline for their job approaches, Tahki gets sucked into a world where he’s in constant danger and the only way he might survive is by trusting the one person who doesn’t seem to like him – Rye. Will they be able to overcome the dangers that are around every corner?

I really, really loved Rye as a character. At first he’s so stoic and almost cruel but as time goes on, he softens to Takhi and I found it so sweet that Takhi could lighten up Rye’s moods. As for Takhi, he’s harder to like because he believes he needs to prove himself at every turn. In reality, everyone just wants him to do his job instead of trying to prove how useful he is outside of being an architect. I loved Takhi’s brother, Sornjia. I loved his way of speaking and how cryptic it could be. I honestly detested how Takhi would talk to Sornjia, though, as if Sornjia was purposely speaking the way he talks just for the fun of it. In reality, the way Sornjia spoke made sense when it came to his warnings but Takhi didn’t want to listen to him. I loved the chemistry between Rye and Takhi once Takhi started to realize everyone wasn’t out to get him. It was interesting to see the world unfold and how things were so different between cultures and how inventors were encouraged so much and how much tech was in the world. It almost had a steampunk feel to the fantasy which really peaked my interest.

This was a phenomenal story but Takhi wasn’t a likable character for me. He always complained that everyone was being selfish and convinced everyone didn’t want him to succeed or didn’t want him to live up to his potential yet he was the one that made it all about himself and refused to accept his designs were flawed. He was very adamant that he could do anything even when he had no idea what he was doing. It grew really frustrating because he brought on a lot of too stupid to live moments and then bemoaned when they didn’t work out. Honestly, he’s the reason I can’t give this book 5 stars because he was such an aggravating character.

All in all, I really enjoyed the book. I loved the pacing and the overall story. I really loved the connection between Tahki and Rye, especially when Tahki stopped trying to prove that he knew what was best. I really loved the world-building but I just couldn’t enjoy Takhi as a character. However, definitely give this one a go if you’re looking for a great fantasy story with a bit of romance and a bit of suspense.