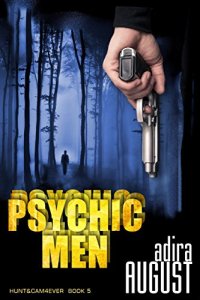 Blurb: Hunter Dane and Camden Snow have settled into a satisfying routine of solving murders and hanging at the club, when they aren’t expressing their affection for one another. Vigorously. A great life in an idyllic location. Until a skinny kid who barely came up to Cam’s chin sought out Detective Lieutenant Dane…

“I saw my father last night,” Asher Gamble told him. “He said Jason Furney’s going to die and people will say I did it.”

Hunt frowned. The boy’s name seemed familiar. “Tell me the rest of it.”

Asher locked his gaze on Hunt’s as intractably as Cam ever had.

“My father killed my mother and my brother when I was two years old. He died in prison four years ago.”
So much for routine.

Review: This is one of those couples that I don’t think I will ever get tired of. From the very start, they’ve had a unique relationship that just worked. Now, they are continuing to work together as part of the special unit led by Hunt. A case falls into their laps, and it seems that one or the other of them is a key player. In the meantime, they are continuing with their somewhat secret relationship, though they are becoming less strict about it.

There is another element to this installment about psychics, government run research and cover ups all seeming to center around the the latest murder, which also happened to take place in the small but somewhat elite community in which Cam lives. There was a lot to this part of the story, but it doesn’t take too long for it to become clearer.

That was all well and interesting, but what I really craved was seeing Hunt and Cam together doing what they do best. They are still making adjustments as they go, and there’s an iffy spot where some soul searching and heartfelt decisions have to be made, but rest assured, you won’t be disappointed with the outcome. Knowing the background of these two and how they came to where they are now really adds to the depth of their relationship and truly shows how perfect they truly are for each other. Ms.August does a great job with continuity, especially as to the characters style, and just as with the previous books, I already can’t wait for the next one.