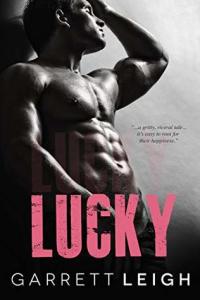 Blurb: Dominic Ramos is a Premiership football player with a secret. There are no trophies for being gay in his game. Locked into his rep as the meanest defender on the pitch, keeping his secret is soul-crushing, but love has no place in his sport, even if his soft heart craves it.

Lucky Coleman is on his knees when he meets a man with more money than sense. It’s a Grindr hook-up for cash, not a love match, but dreaming of his desperate, kind eyes earns a place amongst his numerous bad habits.

Meeting once was risky, twice pushes Dom’s courage to the limit. Losing Lucky seems inevitable, but his tight grip on his image counts for nothing when Lucky starts to fall.

Catching him could cost Dom everything, but if he can set his heart free, getting Lucky long term might be a risk worth taking.

Review: This was such a well-written albeit heartbreaking story about two men who have nothing in common, but are both reeling from a world intent on destroying their souls. I was struggling to figure out who I was most sympathetic to. Even though Lucky was the obvious choice, Dom was just a shell of a man going through his gold-plated life on autopilot. I know you can’t compare a person’s pain, but these two had the cards stacked against them before they ever meet.

I was totally engrossed in this book and loved the way the storyline played out. Dom, though edgy and secretive, exuded a pain that resonated with Lucky. There was just something about the man that called to him and no matter how many times Dom shut him out, Lucky just couldn’t stay away. The same was going on with Dom. He knew he was walking a slippery slope sneaking about with Lucky, if that was even his real name, but he needed him as much as he wanted him.

These two hurt my soul. It was almost physically painful watching them go through life on a razor’s edge. One riding in an ostentatious SUV and living in the lap of luxury while the other was living on the streets, his friend’s bed when he could, and in an unsafe room he rented when he could scrape the money together. There was nothing on paper that said Dom and Lucky should worktogether, but they do, and it was easily portrayed in this story. Highly recommended.