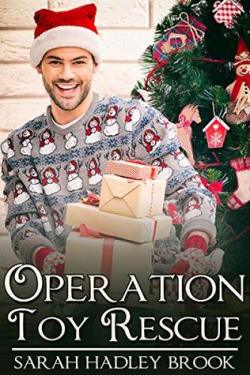 Blurb: When Jules Evergreen lands in trouble at the North Pole and gets shipped off to Snow Hope Island for ninety days, he never expects to take up the cause of the forgotten toys waiting for new homes. Falling for his new boss is not on the agenda either, but his heart has other ideas.

Felix Winterson has grown up on Snow Hope Island and now runs the place. He isn’t thrilled when party boy Jules arrives, and Felix tries hard to ignore the man’s charms. He has other problems, anyway. For years he’s tried to get Santa to look at the growing inventory of damaged toys in the warehouse, to no avail.

When Jules comes up with a plan to save the toys, the men find themselves working closely together. As Christmas Eve looms, there’s a lot at stake. Can they save Snow Hope, convince Santa to rescue the toys, and fall in love all at the same time?

This was such a cute little story! At first, we’re thrust into Jules’s life a few weeks after he’s banished to Snow Hope Island and how he’s just counting the days to getting back to the North Pole. I liked that he was a ‘city’ elf but I also liked that he slowly fell in love with Snow Hope Island. I loved the chemistry between Jules and Felix and how they worked together to come up with a plan to do something with the hundreds of imperfect toys sent to their island. What I really loved, though, is how Jules found a home in not only the island but also a life with Felix. I adored the fact that Jules played such a role in rallying the troops and bringing a renewed sense of purpose to the island. After all, a lot of people considered Snow Hope Island as No Hope Island.

While I really enjoyed this one, I wished there had been more depth to the story and the characters. They were so sweet and adorable and I adored their relationship but I wanted to know more. Also, I’m curious if the person who originally said their plan wouldn’t be considered this year got in trouble considering they lied and said Santa said that when he didn’t.

All in all, this was a very sweet story. I really liked the whole concept of Snow Hope Island and how that was the place where all the imperfect toys went. I loved that Jules found a home there and how things played out. I wished it had a little more depth but as it was, this was an enjoyable short but cute story. I’d be interested to see who else would get a story in this world… maybe Caleb?