Audio Review: You Are the Reason by Renae Kaye 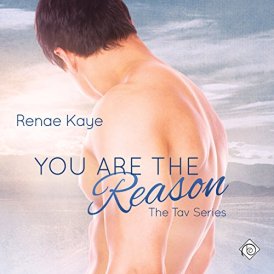 Blurb: Davo’s a pretty average guy. He has a decent job, owns his own home, and spends his weekends at the pub. He fully accepts that he’s gay, but doesn’t want to be one of those gays who are girly. He likes football and other masculine pursuits, and firmly avoids anything that could be seen as femme—including relationships that last beyond fifteen minutes.

Then Davo’s friend and gay idol not only gets a boyfriend, but also adopts a baby girl. Davo is seriously spooked and scuttles down to the pub. That’s where he meets Lee, cute from her cherry-red hair to her pretty little dress and pointy red shoes. Davo is charmed—but how is that possible? He’s gay. Isn’t he? Then Lee tells him he’s actually a guy—he just likes to wear women’s dresses occasionally. Thoroughly confused about an attraction that’s out of character for him, Davo begins the long journey to where he can accept himself without caring what everyone else thinks.

This was a unique twist on a gay romance. Davo is so screwed up on what he perceives to be a real man that he thwarts any efforts to accept that men don’t have to like sports, wear manly and colorless attire, and he near-violently excises anything resembling femme from his life. He is the epitome of toxic masculinity and femme-homophobia, even though he is silently, but mainly, gay himself. His best friends are gay, and he has no issue with gays…as long as they don’t wear pink. Then he meets a lovely, lonely lady.  Lee, a beautiful, petite redhead wearing an amazing dress, was at the bar alone and chats up Davo. He finds out she was stood up on a blind date and they just start chatting and drinking. Davo and Lee hit it off and get drunk together… and then the morning after…..now the fun begins
Davie Gillies performs both Davo and Lee so well that is took a while to even realize that Lee was actually a man. We automatically think we know where this is going, but we really don’t. Once Davo finds out Lee is actually a man, he is not angry, he is flummoxed. How can beautiful and funny and wonderful Lee be a man? The struggle is real for our Davo and you end up feeling more bad for him than mad that he was a femme-homophobic. Mr Gillies had his hands full performing this torn and confused character. Once we learn of why Davo is the way he is, you start to accept that he was not an asshole by choice, but by design. And not his design.
I loved Davo’s interactions with his friends, and his confusion over why they wanted a baby girl to complete their family. I loved that he spilled his guts over his confusion with Lee, but above all, I loved that this book was about helping someone see the error of their ways and them learning that they were better for it. There were some heavy topics, but it was also written some humor. Recommended.