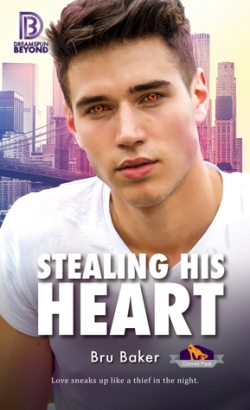 Blurb: Love sneaks in like a thief in the night.

Danny’s parents raised him to believe his wolf was a curse. He’s part of the wealthy and powerful Connoll Pack, but only nominally. He abandoned that world to volunteer with supernatural kids, and he isn’t looking for a mate….

Max is a shifter who is also a detective. He’s working a case that could make or break his career. Danny’s caught up in the case he’s on, and he’s also irresistible. They’re a bad match—Max, an Alpha having trouble with his new powers and Danny, who trusts Alphas as far as he could throw one. But they can’t get enough of each other, and they might bond before they even see it coming.

They could be amazing together, but they have to get past a few obstacles—especially since someone close to Danny might be involved in the thefts Max is investigating.

First thing first … why this series is named “Connoll Pack”, I don’t really understand. Since in my opinion, it has nothing to do very much with Connoll Pack, considering that Danny is probably part of the pack in “name” only, since his parents prefer to spend their time as human.

ANYWAAAY, after getting that out of the way *laugh* I thought this was pretty sweet. I LOVED Danny’s tenacity towards the kids that he helped through his foundation. I loved his passionate attempt to help those kids. He is an admirable person, in my eyes. Max, on the other hand, is a typical Alpha character in this kind of book. He’s a cop, he can be possessive, and so on. Not exactly offering something new, here.

The relationship moves in a speed of light – again, taking the usual mate-bond trope. I’m not exactly enjoy this kind of instant-mate-bond story, but I loved Danny too much to really dismiss everything.

Ami’s Overall Impression: I liked it

OMG, I absolutely loved this book! As soon as I started it, I was drawn right into the story and couldn’t put it down. I loved that Danny was so vulnerable and Max, an off-duty detective, was willing to help him out. Then before either of them know it, Max’s family shows up and things have changed for them without either of them realizing how much their lives have changed. Plus, I really enjoyed that they were complete opposites. They weren’t even the same shifter species, Danny is a wolf and Max is a binturong, which really tickled me because I’ve never read a shifter story with a binturong before. And while Danny’s family has money, I loved seeing that he wasn’t a spoiled little brat about it. He was humble and, while he could be high maintenance around his family, he was more down to earth and I loved that about him.

I also loved that Max was so understanding with the hangups that Danny had and how protective Max was. It was super cute that Max was jealous over some things but tried his hardest to push through that for Danny’s sake. Then there’s Max’s family who are just so lovable and embraced Danny like he was already part of the family. I just loved these two and writing this review makes me want to re-read this one again because I don’t think I could get enough of them!

Now, I will say that when I started this one, I expected to get more of the Connoll Pack. After all, that is the series name but the connection with the Connoll Pack is through Danny, who’s an outsider in the pack so we don’t really get much of that aspect. However, Max does have a connection with the pack so I guess there is that but I just expected to see more of that pack and more of the guys from the Camp H.O.W.L. series. Also, I was a little confused on the whole theft thing. I mean, I get that it was the whole conflict in the story but I felt like it was a little underdeveloped and didn’t really come into the story until the end and by then it felt too rushed. I wanted to see more of a connection between the beginning, where Danny gets robbed, and the ending when things escalate too far.

All in all, though, I really loved this one. I might have even liked it more than the Camp H.O.W.L. series and that says a lot because I adored those. I loved getting to see Max and Danny and how different they were but also how well they fit together. I adored Max’s family and how they were so loving and accepting. I can’t wait to see who’s book comes next and hope we get to see these guys again!

Nikyta’s Overall Impression: I loved it!