Book Review: Tigers on the Way by Sean Kennedy 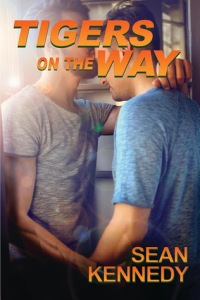 Documentary producer Simon and ex-footballer Declan are taking some big steps toward a lasting life together. They’ve bought a house, and they’ll need it for the family they plan to start. Their friend, Nyssa, has made the generous offer to be their surrogate, and Declan couldn’t be more excited about the idea of a baby.

Simon knows fatherhood is a huge commitment, and though it’s daunting, he sees how much Dec wants it, and he’s sure that together, they can succeed in anything—despite the worries nagging at him.

But just as their new life is taking shape, a health scare disrupts their plans at the worst possible moment. With time running short, Simon and Dec will have to bare their fears and doubts to each other so they can face them before their world changes forever.

I love the Tigers and Devils books and was convinced the series was over a while back. I wasn’t expecting that I would ever get another Simon and DeClan sighting again…and then along comes this little bundle of joy. From the blurb, we understand that the natural progression of family would include a little Simon or DeClan lookalike, but what I didn’t expect was the rabbit hole it went down in the process. I am not usually a fan of romance novels with babies or kids, but I couldn’t resist another visit with my favorite Aussies. But, who can resist the siren call of these two? Not me, that’s for sure, and this book turned out to be so much different than I’d expected…in a good way.
And here you thought I would continue the review discussing the challenges of fatherhood and nappy changing. And you would be dead wrong. This is not the book for that, and the way this one ended, I  am near certain that this series is still not over. That would be a yay from me.
Instead, this time it is DeClan craving to be a dad, and Simon craving to keep DeClan to himself. That sounds a bit selfish, but in reality, Simon is just a bit scared and not convinced a baby is what they need. He is near dead set against it, until…..(Spoiler). Nope, not telling you. What we get is maelstrom of emotions for our guys. What once seemed to be that natural progression was now threatened. Simon and DeClan have dealt with some nasty situations in the past, but this one will determine if the two are actually standing at the end. I admit, I was having all sorts of feels during this story, and I completely understand where both guys were coming from. It was a bit scary there for a while.
What I can tell you is that our boys are still together, stronger than ever, and I really hope there is another book.

Overall Impression: I Loved It