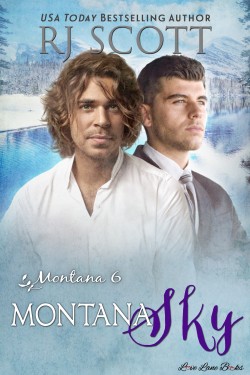 Blurb: When they spend time alone on a Montana mountainside will Tyler ever convince Martin that like sapphires, love is worth searching for?

Martin’s name was the very last on a kill list. The son of a murderer, he’s had no childhood; lost in a horrific holding pattern of death that turned his heart to stone. Thanks to the man who called him brave and spared his life, he no longer has to look over his shoulder, but he does have one question. Why did Justin let him live?

Tyler Colby has identified a major flaw in the seismic mapping system used to monitor earthquake activity. Sent to Crooked Tree by his employer, the Montana Bureau of Mines and Geology, he is tasked with adding a new remote station to the network. The installation should be his entire focus, but the lure of sapphires and his attraction to a heartbroken young man called Martin is enough to make him want more.

I was super excited to be returning to Crooked Tree Ranch. It is one of my favorite series by RJ Scott and I still needed to understand Jason a little more. He had it rough and tough, but he is also rough and tough, so seeing a “softer” side to him was intriguing. This book is not about Justin, per se, but why he let Martin live is paramount to the entire storyline.
Martin is considered a bad guy, a liability, but Justin saw just enough to allow him to live. Now Martin, broken and disillusioned, wants to know why? He was a difficult character to read because he was just the most broken and lost character to come out of this series. He literally is a walking corpse, with no purpose, no reason to exist, and no hope to be anything more. Seriously, it was depressing, but with reason.
Enter Tyler, a nerdy scientist who comes to Crooked Tree Ranch to install seismic equipment. No plans other than do his job and save the world, but what he didn’t expect was his fierce attraction to the young man with the dead eyes. He tries to engage Martin, but Martin has tuned out everything at this point and makes Tyler work hard to get him back engaged with life…and the fun that comes with falling in love.
This is a great installment to the series, and though the subject matter was a bit rough at times, I ended the story feeling like a weight was lifted off my shoulders. Plus, I now feel as if I know, and respect, Justin, just a bit better. Read the series and you’ll fall in love with Crooked Tree Ranch and the entire family that resides herein, too.