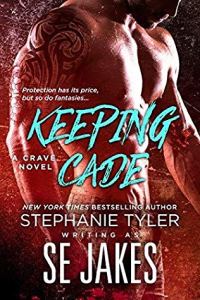 Blurb: Protection has its price, but so do fantasies…

Fantasy Week happens twice a year at Crave, and it’s always a big hit—a way to live out your wildest fantasy in a safe, sane, and consensual manner.

But when Cade comes in with his Fantasy Week invitation, he’s not happy about it. He’s stoic as hell and his preferences don’t seem to match his fantasy at all…and yet, despite that, he enjoys himself with Tegan and Vic. At least at first.

When it becomes glaringly apparent that the fantasy isn’t something Cade’s comfortable with, it’s confusing for the men he’s been paired with, and Tegan and Vic put a stop to the scene immediately.

What Cade doesn’t know is that Tegan and Vic are not only co-owners of Crave, but they’re also owners of a mercenary group, Gray Ops, that’s run out of Crave. They’ve also been circling each other for years… but nothing sparks until their session with Cade.

What happened in Room 4 is something none of the men can forget…but it’s got nothing to do with a fantasy and everything to do with blackmail. Can Tegan and Vic help Cade keep his secrets, while keeping all of them safe at the same time? Because the threatening to spill out aren’t only Cade’s…

*This series is set in the MEN OF HONOR world, in the bar called Crave from Bound By Honor

I love S.E. Jakes’ writing style and I remember going bonkers over the Men of Honor series, so I was a tad excited about the Crave Club series. What was a surprise, or maybe not, is how much I barely remember the first series. In my defense, and in defense of the author, I did read that series many years ago. But anyway, we have a new trio to drool over and believe me when I say all three of these men: Vic, Tegan, and Cade are all drool worthy.

There is a lot going on, besides the hanky panky in room 4 of Crave…and that something else is actually quite a lot. And for some reason, though I was satisfied at the end, I am unsure if it was all settled or not. It didn’t feel like it, and hopefully that will happen in the next book(s). Cade is a fighter, literally, but also being blackmailed, stalked, and hunted…you name it, he has a lot of secrets and he is in deep trouble.

In walks more trouble with the names of Vic and Tegan…good trouble, that is. Now these two could have had a book all of their own, and a part of me thinks it would have been a better story without Cade. But then again, they did work well together, so it was all good.

So, if you are already an S.E. Jakes fan, or new to the author, this book may just be what you have been waiting for. It was not my favorite, but it was still really good, and I look forward to seeing where we go from here.