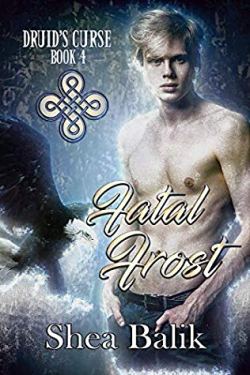 Blurb: No way was Arne going to allow fate to chain him to a guy who thought all creatures, even those determined to kill you, were worthy of saving. Arne was a Viking warrior, death was his thing and he was damned good at it.

Dermot Kincaid believed all of God’s creations deserved respect. He was a pacifist at heart, but that didn’t mean he couldn’t stand up for himself. Even when that meant getting retribution against the asshole who thought he was better than anyone else.

When Arne and Dermot are attacked, they must find common ground so they can work together to defeat the enemy. If they can’t, they may not just risk losing, but they also risk their hearts developing a Fatal Frost.

This one was easily my favorite book of the series so far! I absolutely loved the development and where things are going. I loved Arne as a character and I loved seeing him fight the pull to Dermot. It was interesting to see how different Dermot and Arne were. How fierce they could both be but then how passionate AND compassionate they were. I also really adored Dermot’s nephew, Gillie, and how he played a role in Arne and Dermot becoming closer. Arne could be a complete asshole at times but then he could also be really sweet. I liked that Dermot was different than the other druid’s as well in that he wasn’t surprised by the things going on and how he was able to overcome his fears to help in any way he could. He is easily the one who’s more involved with his history than the others.

While I adored this book, I had a few issues. For one, while I really, really liked Dermot as a character, I felt like he was being childish at times. I mean, how do you go and freeze someone without any remorse because the first time he did it to Arne, he had no idea Arne was immortal and, therefore, how did he not think he just killed the man? Add to that, whenever he didn’t like where things were going with Arne or if Arne would get too personal, he’d freeze him and walk away. I could get if he froze Arne to shut him up and have a chance to state his point but he’d just walk away and leave him for hours. And I loved that Dermot had such an immense power but I’m confused why none of the other druids tried to help fight the Unseelie guards or their pets? It seemed to just be Arne and Dermot doing all the work while the others just stayed out of sight but they’re supposed to work together to defeat them… so why didn’t they? Plus, I have more questions than answers after this book. Like, how we still don’t know where or how the Unseelie are getting through the veil in between the rituals and how Aed’s magic doesn’t seem to be working for them anymore.

All in all, this was definitely my favorite of the series. I liked that Arne and Dermot weren’t all over each other from the beginning because they honestly disliked one another but as time went by, they got closer and I enjoyed that start as ‘enemies’. I wished we had gotten a little more of all the druids working together and some more answers to all the questions I now have but, as it as, this was a great addition to the Druid’s Curse series. I’m eager to see what happens next because things are just starting to heat up!

One thought on “Book Review: Fatal Frost by Shea Balik”