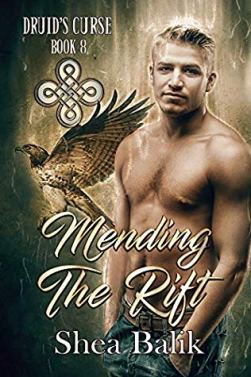 Blurb: THE END IS NEAR!

The end would be upon Brandr and his friends soon. The only question, would Brandr be able to find his fated one in time? He feared he was too late when he arrived to find the field empty. Then the Veil opens again and hell rains down upon him as the Unseelie pets attack. But when Brandr was too injured to move, the Druid he was destined to claim as his own flees in terror. Talk about demoralizing.

That did not happen. Not even in some weird fantasy could Logan have imagined that a dead man could come back to life. And he had definitely been dead, since Logan had to put his head back on his body. But when he was faced with the truth, that the man was immortal, Logan has to admit to being…intrigued.

But as Samhain draws closer, the danger around them increases as the Fae converge. The Fae must be defeated if Brandr and Logan hope to find their happily ever after. Only by working together will they have any chance of Mending the Rift and saving humanity.

PLEASE NOTE: This is the FINAL book in an ongoing story arc. It is HIGHLY recommended that you read this series in order! Thank you!!

First, I just want to say, as the final book in the series, it’s VERY important that you read the other stories first in order. Yes, the other stories focus on other couples BUT the overall arc of the series progresses with each book so by reading them out of order, you wouldn’t understand some things and why they’re important. With that said, I really loved these characters. I loved that Brandr’s role as a doctor and Logan’s ability to heal gave them something to bond over. I also really liked that this one shows a serious injury with one of the Vikings because while they’ve mentioned it in the past, I liked the additional conflict of Brandr being beheaded when he first meets Logan. I loved that Logan wanted to help everyone even at the risk of himself and I loved that Brandr was so bossy and just wanted to keep Logan safe. The best part of the story for me though was definitely Leith, I loved him so much and how he tried to channel Brandr’s bossiness, it was so cute!

I really enjoyed this book but I’m conflicted by my feelings for it. Mainly because this didn’t feel like a story about Logan and Brandr. It felt like Kyleigh’s book again and that kind of aggravated me. Yes, Logan did learn some things by helping Kyleigh and those things did help with the Veil but it all kind of confused me how it came together and felt like it was a little too easy to find out this info and how the big conflict played out. Even so, I felt like Logan and Brandr didn’t know each other all that much  and Logan even said how little time they got to spend together. I was hoping to get to know these guys like we’ve been able to know the others (with exception of the Oluf and Mingus) but just when I thought we were going to see them get closer, it changed focus onto Kyleigh.

And this leads to why I’m conflicted because I did like seeing Logan use his abilities to help her and get a little more questions answered with Kyleigh and the fae in general but I didn’t want the focus to be on Kyleigh and that’s what it felt like to me. Add to that, I think the book could have been cleaned up a little bit as there’s mention of ‘hundreds of fae’ crossing the Veil but then only seemed like a few attacked them or how Brandr had gotten to the field in the beginning if he didn’t drive a car, little details like that could have been cleaned up. Plus, I still have questions that were never answered like why Fen’s magic stopped hiding the house or why, all of a sudden, are the Seelie and Unseelie working together… just a lot of things that we didn’t get answers too going back to book one. Also, I’m really confused on why no one has gotten the fact that the rituals can be done at any time (as they’ve done numerous times when forced to) so why didn’t they all just think of doing the ritual once or twice a day as a precaution to keep the fae away until they were ready with a plan? Every time they did it, it would close the Veil so I’m just confused why out of so many druids, no one thought of that.

All in all, I did really enjoy this one and I did love the way the author ended the series. I did like Logan and Brandr as characters but I didn’t feel like we got to know them and certainly didn’t get to see them get to know one another. While I loved seeing everyone use their abilities as a team and seeing Logan learn his, I would have liked the story focused less on Kyleigh and more of the boys or more on Logan and the other Druids working on a plan of attack. Still, even though this is the final book in the series, I hope it’s not the last we see of these guys because the world is very interesting. I would even like to see things on the other side of the Veil!