Audio Review: Nothing Special V by A.E. Via 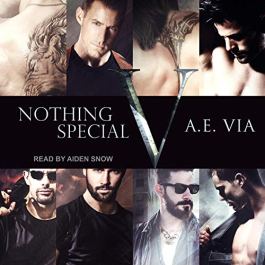 Blurb: Atlanta’s notorious narcotics task force is at it again. They are stronger, bigger, and better than ever. Especially when a city councilman sends RECON Marine Edwin Steele – who’s been blacklisted from his Oakland department – to join the team.

Steele was ready to hang up his shield. He was done fighting with bigoted bastards that couldn’t respect the job. He was good at fighting; he just needed the right team to fight with. When his uncle – City Councilman Rasmus Steele – shows him a video of God’s team in action, he knows right away it’s where his nephew belongs in order to restore his faith.

Steele was skeptical about his new placement, but when he meets God’s technology specialist/computer genius, “Tech”, he’s willing to give it his all, and he definitely shows and proves.

Tech is stunning. His sweater vest and khakis, a stark contrast to the blue-jeaned roughnecks he works with. A beautiful sheep amongst the wolves. Steel thinks there’s no way the brilliant man would be interested in a hardhead like him, but Tech has a few badass hidden talents of his own and manages to surprise him…surprise all of them.

I am totally hooked on this series and I am honestly unsure if it’s more due to the story or the narration. AE Via tells an incredible story and her world build is so intricate and detailed that I have no issues envisioning the setting and the characters. Top that off with the deep voice of Aiden Snow, who, regardless of the many players in this installment, easily differentiates Godfrey from Day from Tech and Steele to Freeman. He has this deep smoky voice that will forever be linked with the Nothing Special series for me. I swear, if I ever ran into this man on the street I would instantly stop and look around for one the characters from this series.
In this fifth installment, we have all of the characters, from the first four books, playing a very active role. In addition to introducing a couple newbies. The beauty of Steele and Free joining the squad is that we have confirmation that the series is continuing and that thrills me to no end. Steele came on strong, and the narrator did a knockout job bringing his ferocity to life. I was so excited to get a rough and troubled warrior on the team, and for a while he did not disappoint…but then, he softened…like literally on the next page. Tech knocked his socks off, and apparently his roughness, too, and I missed that. I was thrilled for Tech to get his chance in the field, and to get his own man, but the swap in roles was not my cuppa. I still loved them, they are great for the series, and each other, but I was glad to have the other team members there to help me get over my minor disappointment. Here’s hoping the real Steele comes out to play in future books, I look forward to seeing him in action.
My favorite part had to be Blair and Furi at the Day/God bachelor party..that was amazeballs. Do people still say amazeballs? If not, they should because that was HOT! Aiden Snow was stunning in his performance and it was brilliantly portrayed. I loved the wedding, and I loved that it was not this huge, elaborate shindig because that would not have kept with the characterization, and what they got was perfect. I also loved when Rux and Green took care of Steele’s “neighbors”…that was when Steele realized he was with kin and where he belonged.
The entrance of Freeman was a surprise, but I love where that storyline is heading…and it worries me at the same time. Here’s to another well written and fantastic narration of the Nothing Special series. Highly recommended for anyone with a pulse.