Book Review: Death of the King by Jake Biondi 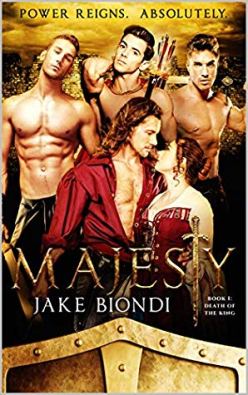 Blurb: “Checking to ensure the king was dead, his murderer pulled the dagger from the monarch and rolled Zachary’s body onto its back. The king’s blood coated the ornate etchings on both sides of the knife. His dead eyes looking up toward the heavens, Zachary lay lifelessly on the tower floor.” -Chapter One

The shocking murder of King Zachary Chamberlain sends his entire family and kingdom into turmoil as the hunt for his killer begins. As Zachary’s eldest son Prince Tobias prepares to be crowned as the new king, suspicions arise between him and his three younger brothers. In the meantime, the once-ruling Henderson family seizes on the chaos in the kingdom in an effort to overthrow the Chamberlains and retake control.

As tensions rise and the search for the king’s murderer continues, some relationships crumble, forbidden love flourishes, a prisoner escapes, and a common farmer rocks the royal family to its core.

It all leads up to an exciting series of cliffhangers that plunge every member of the royal Chamberlain family into peril.

I so did not foresee me loving this book. Talk about being brilliantly blindsided. For one, it is a bit historical, actually, more medieval with the castles and knights and royal intrigue. That usually doesn’t work out too well for me, but it is perfect for this series. Then we have the point of view of nearly every character and storylines for them all…and wow, it was so needed because the road forward was beyond complicated, and everyone is essential to the plot. It was a true trainwreck of the most delicious kind and I was hooked from the first chapter. It is also extremely fast paced. There are not a ton of details, and at first I thought that would bother me, but I loved it.
King Zachary is killed immediately and his wife, four sons, and daughter are all thrown into a whirlwind of chaos, mystery, and intrigue. A major whodunit with pending disaster awaiting the royal family. We have adultery, twins who were having an affair with the same commoner, distrust among the princes, a mystical old sorcerer who is more than meets the eye, a pending battle with another family who feels they are rightful rulers, and misplaced love and loyalty. It was a lot and not enough. And it ended on a huge cliffhanger, so big that I am unsure who is still alive and what is going to happen next.
This was truly a magical, but terrifying ride and I cannot wait for the next book.