Book Review: At All Cost by Katerina Winters 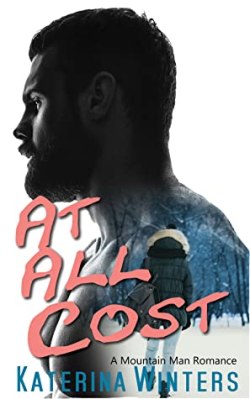 Blurb: The remote woods of Oregon.

And a mean-tempered recluse.

Standing alone in the middle of the Oregon woods, Alessia Conners was officially out of options.

With no money, no family, and no friends to turn to Alessia has little hope of escaping the predator in her home without doing something–drastic. All she wanted was a safe place to call home. With a tent and some camping gear, she is determined to find refuge and a new start to life in the peaceful woods of Oregon.

There was something in his woods, something that didn’t belong.

Jax Beranek is a rugged, mean recluse whose powerful presence and sharp tongue hide a damaged man who has given up on the world. He is a man that doesn’t need or want anyone. He has his cabin, his peace and quiet, and above all else is solitude. So when he happens to find some young woman sorely unprepared and close to getting herself killed in his woods he gives her a hard but fair choice: leave with his aid or leave tied and gagged over his shoulder, but either way she was leaving his damn forest.

It was the pain though, that familiar soul-wrenching pain he recognized all too well inside the lonely, sad-eyed woman that struck at a cord of compassion he didn’t know he possessed.

But his help wouldn’t be free–he was going to put the little vagabond to work.

With her days filled with hard work, back and forth bickering and her nights filled with exhausted sleep in Jax’s safe, cozy cabin, Alessia could finally for the first time in months breathe easy and forget about the monster in her past.

If only the monster would forget about her.

Contains some violence and lots of steamy adult themes

First, I’m going to start with the “thing” I liked.  There was really good sexual tension between Jax and Alessia.  The very slow burn kind where things start then stop then take two steps back before they start again.  And that sums up what I liked about this book.

Next, time for the bad.  And it starts off bad from the very beginning.  Alessia flees from her mom’s abusive live-in boyfriend who keeps threatening to get into her pants.  After failed attempts at breaking away and going to a women’s shelter, Alessia decides her last resort is to steal his car, buy some camping gear and go squatting in the woods on some other guy’s property.  She has no plan, no education, but somehow she has a blog following that is donating her money, yet she has no internet friends that will provider her REAL assistance? I find that hard to believe.

For the second bad thing:  once Jax discovers her trespassing, he hog-ties her, carries her to his cabin and then drugs her unconscious so she can’t leave.  Yes, he DRUGS her without her consent. Then he takes care of her and offers her a place to stay as long as she helps with chores around his property.  No, she is not a hostage. Alessia stays because she has no plan and no where else to go. Then the attraction starts and all that sexual tension and it’s easy to figure out where it goes from there.

For the third bad thing:  remember the horrible abusive guy after Alessia?  Well, of course he finds her, but she never actually knows that she’s been found because Jax DRUGS her again!  He then tortures and murders the bad guy…and Alessia NEVER finds outs. The end. They lived happily ever after.  Really?

I actually really liked the middle of this book, but it was totally ruined by the beginning and the ending.

Overall Impression: It was okay, but not good