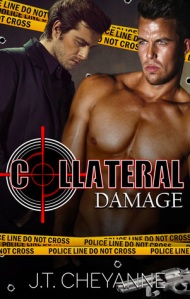 When a sexually deviant killer sets his sights on the gay men in the area, Trevor is assigned the case. In a wicked twist, all evidence points to Logan. Can Trevor’s past be repeating itself? In a race against a killer, Trevor struggles to overcome his own insecurities and clear the man whose touch sets him on fire. Will he succeed or will their budding relationship become Collateral Damage?
END_OF_DOCUMENT_TOKEN_TO_BE_REPLACED