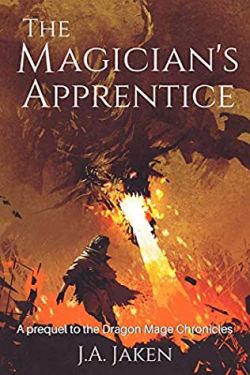 Blurb: Jander Teregnan has never wanted anything more than to become a mage—to serve his king and defend his country as he explores his natural talent at commanding the strange force known as magic. Of course every apprentice needs a master, which comes with its own set of challenges…especially when the master he’s chosen for himself is none other than Andrei Teresh, personal advisor to the king and master mage of the city of Vallerin. Andrei, however, has more pressing problems on his mind than dealing with the unsolicited advances of one untrained mage-apprentice. A fierce and merciless army of unknown intent is sweeping across the land, threatening the security of the kingdom he has sworn to protect. Even worse, dragons—long thought to have withdrawn from the world of mankind—are emerging once again and spreading chaos in their wake. Somehow, Jander must find a way to help; not only to prove that he can be of use in the defense of his kingdom and become a mage, but also to secure his place at the side of the man he hopes to claim as master both of his magic and his heart.
END_OF_DOCUMENT_TOKEN_TO_BE_REPLACED