Audio Review: A Walk Through Fire by Felice Stevens 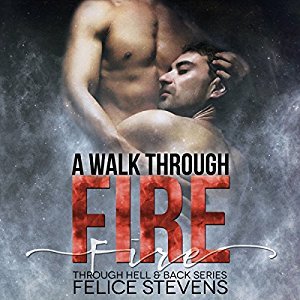 Blurb: Years after running away from an abusive foster family, Asher Davis still struggles with the guilt of leaving his foster brothers behind. He’s climbed to unimaginable heights as a ruthless, high-powered attorney, creating a life of power and control and takes whatever and whomever he wants.

Blaming himself for the death of his parents, Dr. Drew Klein retreats into a shell of loneliness, merely going through the motions of life. After a disastrous, short-lived marriage, Drew leaves his lucrative medical practice to set up a clinic for abused young men and women. The decision has more repercussions than Drew could ever imagine when the dark and sensual Ash Davis volunteers to help.

Although Drew isn’t gay, Ash is inexplicably drawn to him. He vows to simply bed him and forget him like he’s done with every other man. However, Drew’s sweet and caring nature and unexpected passion both stun and frighten Ash, who questions his right to any happiness at all. And when Ash befriends an abused young man who unwittingly draws the clinic into danger, threatening Drew’s safety and that of his beloved grandmother, Ash discovers that there is nothing he won’t sacrifice to protect the love he never thought he’d find.
END_OF_DOCUMENT_TOKEN_TO_BE_REPLACED