Book Review: Not Safe For Work by L.A. Witt 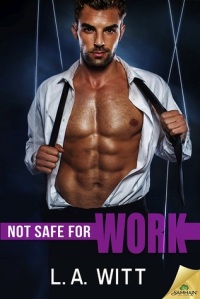 Blurb:  They’re a match made in the dungeon…until their secret gets out.

Bored senseless in a meeting, architectural modeler Jon McNeill amuses himself with a kinky dating app on his phone. Then the app matches him with another user…who’s six feet away. Suddenly Jon finds himself on the same page as someone way above his pay grade: millionaire property developer Rick Pierce. His firm’s biggest—and hottest—client.

The app isn’t kidding either. They’re a perfect match. Jon’s a Dom, Rick’s a sub, and bondage is their thing. Both guys are well into their forties, know their way around the bedroom, and definitely appreciate a good suit. And the best part? They’re a match outside the bedroom too.

But office relationships aren’t easy to keep a secret. When the truth comes out, Jon is certain he’s about to get fired. Instead, his bosses throw him a curve ball—an ultimatum that puts both his job and his relationship in jeopardy.
END_OF_DOCUMENT_TOKEN_TO_BE_REPLACED