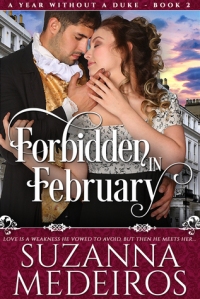 Blurb: A Year Without a Duke

The duke has died. Long live the duke! The only problem is no one knows who the new Duke of Beckworth is. All of England wonders, but no one more so than the people who depend upon Beckworth for their livelihood. In 1816, a year so cold that the word “summer” is a cruel joke, that livelihood is even more uncertain. However, they are all about to find out, with the duke away, there is nothing more warming than scandal and love…

Robert Milton’s future as the valet to the Duke of Beckworth is uncertain. His employer has died, leaving no heir in sight. When Robert’s mother also dies, he discovers that her companion has taken over her household.

Isabel Durham’s dream of gaining her independence is almost a reality, but her cousin is determined to see her married to a wealthy but much-older man. Robert’s arrival in London is the answer to her prayers. Neither can deny the very real attraction sizzling between them and if he ruins her, she’ll be free of the unwanted marriage.

But Robert’s very existence has proven to him that romantic entanglements are to be avoided at all costs. His desire for Isabel could cost him the one thing he’s vowed never to lose–his heart.
END_OF_DOCUMENT_TOKEN_TO_BE_REPLACED