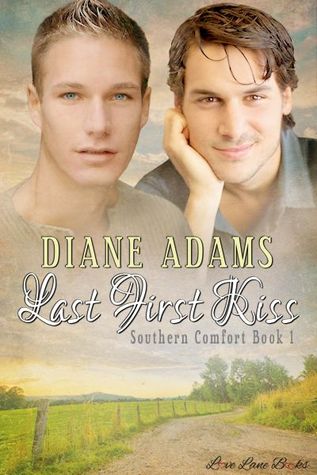 Blurb: Eighteen-year-old Gage Harris is not a part of twenty-five year old Trent Foster’s plans. He likes Gage but the intense attraction between them makes remaining just friends unlikely, and the young farmer with two small children is a complication Trent doesn’t need.

Despite all the reasons to stay away, Trent is pulled into the small family. Gage’s boys are delightful and the young man’s honesty and genuine affection impossible to resist. Trent is intrigued by a life so different from everything he’s known. As he struggles to reconcile his plans with his feelings Trent begins to suspect that his random offer of a ride in the rain might lead straight to his last first kiss.

I was intrigued by the blurb and very curious how an 18 year old gay father of two came to be a family man so young. Gage Harris is not your typical teenager. He is much wiser than most 30 year olds; a man who is very grounded and accepting of his lot in life. It may not have been what he’d planned for himself, but he is not the “woe is me” type, but more the “grab life by the horns” kind of man.

Trent is a man with a plan. Recently graduated and moved to a small town for a new job opportunity. The plan is to get experience and get out. Move on to a big city and earn the big bucks. What wasn’t planned was to meet a young, poor, farmer who smiles as if the world is all sunshine and unicorns; and who makes his heart wake up and rattle in his chest for the first time in his life.

Trent and Gage become friends after Trent begins picking Gage up on the side of the road and drops him off at his uncle’s farm where he works. This becomes a weekly trip that forges a friendship between the two men. While they are attracted nothing can happen as Gage drops the bombshell that not only is he a father but he is also married to a woman. Trent is crushed and tries to convince his heart that it’s nothing but friendship in their future.

The majority of the story is the blossoming friendship between Trent and Gage. Even though Gage is married, he is gay and his wife has known he was gay from the beginning. There is a story there and you will get it. She is also non-existent as a parent and all of the responsibility falls to Gage. Trent starts to help an overwhelmed Gage and begins to love his boys too. You learn a lot more about Gage’s wife Cara, and why she is the way she it. There is more than meets the eye, and at the end you can decide if you understand her or say good riddance. I said good riddance, myself.

This is a slow-burn romance and not a sex-fest. As a matter of fact the story is just about over before they even have sex. Gage is the main reason. As I said earlier, he is much older and wiser than his years. Even though his marriage is a farce and in name only, he is still a committed husband and father. Fortunately that changes for the guys and there is a definite HEA, as Gage would say, “if you’re going to do it, do it all the way”, and they do.

Definitely a sweet story with a touch of family drama, and with very likable characters that you root for and hope that life begins to settle down and the sun starts shining on them a bit more. Highly recommended for those who like a slow-burn and friends-to-lovers story with cute little kids.