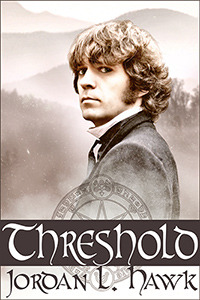 Whyborne, Griffin, and their friend Christine travel to Threshold Mountain, a place of dark legend even before the mine burrowed into its heart. A contingent of Pinkertons—including Griffin’s ex-lover Elliot—already guard the mine. But Griffin knows better than anyone just how unprepared the detectives are to face the otherworldly forces threatening them.

Soon, Whyborne and Griffin are on the trail of mysterious disappearances, deadly accidents, and whispered secrets. Is Elliot an ally, or does he only want to rekindle his relationship with Griffin? And if so, how can Whyborne possibly hope to compete with the stunningly handsome Pinkerton—especially when Griffin is hiding secrets about his past?

For in a town where friends become enemies and horror lurks behind a human mask, Whyborne can’t afford to trust anything—including his own heart.

Before I started this story, I didn’t bother to look at the blurb to see what it was about. All I knew was that it involved Whyborne and Griffin and that was enough for me. If I had read the blurb, however, I most likely would never have picked it up because of my aversion to reading books with exes in them. Yes, I have weird hangups! LOL

While I’m a little peeved that Elliot, Griffin’s ex, caused so much mischief, I won’t deny that I’m glad I read this because I ultimately enjoyed it. It shows Whyborne, Griffin and Christine as they go on another of their adventures. This time investigating some strange occurrences in a mining town for Whyborne’s father. While they knew it might be something ‘paranormal’ they had no idea just what they were getting themselves into. With the threat of not only Elliot causing doubts between Whyborne and Griffin but mysterious disappearances, strangely acting individuals and disturbing abominations, the gang have to once again fight for their lives and the lives of the people within the town of Threshold.

Even having just read Widdershins a few weeks back, I found that I missed reading about Whyborne and Griffin. Whyborne is still awkward and uncomfortable in just about any situation while Griffin is that steady rock, filled with calmness and soothing words. The effect they have on each other is potent to say the least and I found the way their relationship developed and grew during this novel very appealing and ultimately sweet. I love the fact that their love is bone-deep and can withstand temptation. It warms my heart, to be honest!

My only issue with this one, though, was how long it took me to really get into the story. Up until about 40% or so, I didn’t feel that need to keep reading like I did with Widdershins. Around that time, though, I did get that feeling and ended up gobbling up the book after that point. I also have one question: With Whyborne’s ability to create fire, why didn’t he ever try to blow up one of the creatures? I would think they’d have enough combustibility in them to be lit on fire and ultimately burn…

In the end, this was still a great story. The characters are still intriguing and Ms. Hawk has a way of weaving a good tale around not only legends and history but incorporating disturbing creatures within it. I can’t wait to read more of Whyborne and Griffin because, honestly, I really want to know what they get themselves into next!