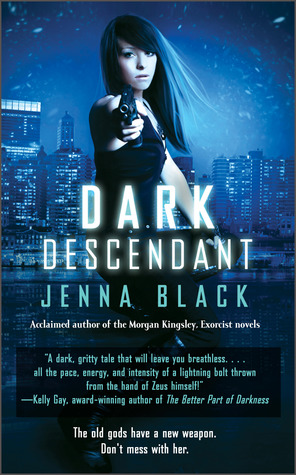 Blurb: Nikki Glass can track down any man. But when her latest client turns out to be a true descendant of Hades, Nikki now discovers she can’t die. . . .

Crazy as it sounds, Nikki’s manhunting skills are literally god-given. She’s a living, breathing descendant of Artemis who has stepped right into a trap set by the children of the gods. Nikki’s new “friends” include a descendant of Eros, who uses sex as a weapon; a descendant of Loki, whose tricks are no laughing matter; and a half-mad descendant of Kali who thinks she’s a spy.

But most powerful of all are the Olympians, a rival clan of immortals seeking to destroy all Descendants who refuse to bow down to them. In the eternal battle of good god/bad god, Nikki would make a divine weapon. But if they think she’ll surrender without a fight, the gods must be crazy. . . .

Addiction, thy name is Nikki Glass!

With every new year that rolls around, I like to read a whole series to start it off right. This year was hard to decide because I wanted one that didn’t have half a dozen books or more but also one that didn’t only have one or two stories. I came across the cover of Dark Descendant and knew right then, this would be that series. Yes, I am a cover whore 😛

Nikki Glass is a PI who literally has a gift from the gods. As a descendant of Artemis, the Goddess of the Hunt and a Moon Goddess, she can find anything. When Nikki’s latest client ends his life, his power of immortality transfers to her. Unfortunately for Nikki, that means she just became a Liberi and forced into a new reality where she’s no longer a mortal or understands any of what a descendant of the gods mean. Add to that, she now has half a dozen people thinking she’s a spy and the Olympians, another group of descendants, thinking she’ll be a useful weapon. What’s a girl to do when she’s being pulled in every direction but just wants everything to go back to normal?

Aww, man! How I loved this book! I will freely admit that I’m slightly biased because I absolutely loved the potential love interest (who I shall not name). Readers should know that this isn’t a romance, it’s a mystery with some suspense and action. While there are romantic-ish feelings on Nikki’s part, her love life is still in the baby stage so, I’m assuming, over the next few books it’ll develop into something. Hopefully.

Now, let’s talk about Nikki. She’s stubborn, to say the least, but I found her pretty badass. Okay, yes, sometimes she acted a little naive or stupid in a situation (she could have easily called in for backup instead of doing things alone) but I still loved her. She has a tendency to get in sticky, dangerous and deadly situations that caused a lot of conflict. I also loved the other characters like Jamaal, Anderson and Blake. Each of them are mysterious in their own way and I couldn’t get enough of seeing them.

The story is about Nikki trying to get comfortable with what she’s now become. On top of that, she aligns with Anderson and his gang of Liberi in an attempt to save her family from being hurt by the Olympians. The only thing Anderson asks is to find his wife, Emma. So, almost the whole story is about Nikki learning to use her abilities to find Emma. During all that, she’s slowly learning the rules about being a Liberi and what she can and cannot do. I loved that there was some intense moments like Jamaal’s punishment.

My only issues with the story is that some of Nikki’s monologue is very repetitive (family issues, etc.). Also, there were some discoveries from Nikki that seemed pointless to the plot (Nikki finding Emma’s ring) because it made me wonder how Emma’s ring got where it was, which was never answered.

In the end, I devoured this novel within a few hours. It was such a good story, easy to read with likeable characters and an intriguing plot. I loved the refreshing aspect of dealing with descendants of gods and goddesses. I immediately went on to read the next in the series and I can’t wait to see where the series leads me. Definitely recommended if you’re a fan of M/F urban fantasy.