Sleuth Week Review: The Trouble With Tony by Eli Easton 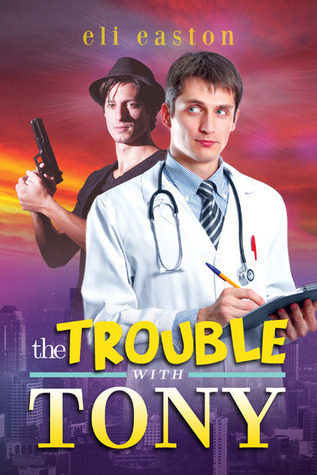 Blurb: As part of the investigation into the murder of a young woman, Seattle P.I. Tony DeMarco poses as a patient of Dr. Jack Halloran, the therapist who treated the victim at a Seattle sex clinic. This isn’t the first time Tony has gone undercover, but it’s the first time he’s wanted to go under cover with one of his suspects. He can’t help it—Jack Halloran is just the kind of steely-eyed hero Tony goes for. But he’ll have to prove Halloran’s innocence and keep the doctor from finding out about his ruse before he can play Romeo.

Dr. Halloran has his own issues, including a damaged right arm sustained in the line of duty as a combat surgeon in Iraq and the PTSD that followed. He’s confused to find himself attracted to a new patient, the big, funny Italian with the puppy-dog eyes, and Tony’s humor slips right past Jack’s defenses, making him feel things he thought long buried. But can the doctor and the P.I. find a path to romance despite the secrets between them?

When I picked up this book, I was expecting a mystery, with a good amount of action-packed scenes where the suspense literally has me on the edge of my seat. Imagine my surprise when I found the opposite. This story is light enough to be considered fluffy with a heavy dose of humor and very little sex. Oh, my! Right up my alley, I dare say!

As a private investigator, Tony DeMarco has just been given a case about a young woman who was murdered. Prime suspect number one: Dr. Jack Halloran, a sex therapist. While Tony has his suspicions on who the real murderer is, he still goes undercover to make sure Jack isn’t the killer. What should have been an easy assignment turns into so much more when Tony lets Jack know why he’s there… because of his Picky Dick. With Tony desperately wishing Jack isn’t the killer and Jack trying his hardest to keep things professional, how will these two ever make it past the sex clinic?

Okay, so this story was so much fun. I was pleasantly surprised when I started reading this and couldn’t put it down. Tony is charming and funny but his Picky Dick is very real. I must say, I’ve never heard of his ‘issue’ but I enjoyed reading about it. Mixed with Jack being emotionally and physically damaged not to mention calm and professional, these two fit well together. Even with their issues, this is still a light story and their very real problems don’t in any way make this story depressing or angsty, which I’m eternally thankful for!

I think my only issue is that with Tony being in the closet, I found his coming out to be very anti-climactic and honestly wish he wouldn’t have told his family the way he did. I would have liked to see his family’s reaction to him being gay and them meeting Jack because coming from an Italian family myself, it definitely wouldn’t have been so cut and dry, IMO.

In the end, while the book wasn’t what I was expecting, it was exactly what I was in the mood for. With a light, slightly sweet and definitely interesting story, Ms. Easton has managed to make me a fan of not only her characters but her storylines and I’m definitely looking forward to reading more from her!

One thought on “Sleuth Week Review: The Trouble With Tony by Eli Easton”