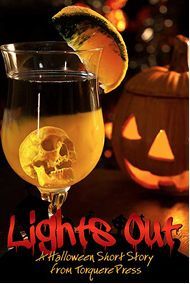 Blurb: When Robert Caldwell inherits a haunted house, he calls on ghost-hunter Simon Feximal to rid him of the supernatural menace. But the ghost is stronger than either man realizes — strong, angry, and desperate for release. Trapped in a haunted house with a dangerously attractive ghost-hunter and a sexually frustrated spirit, can Robert survive the night intact…and will he want to?

The Caldwell Ghost is a spooky, short story about the first meeting of journalist Robert Caldwell and ghost-hunter Simon Feximal.  It has been said that Caldwell Place has been haunted for some 200 years.  After inheriting the house, Robert moves in with all intents of selling the property; of course the ghost stories can’t be true!  At first, Robert starts hearing the sounds of passion night after night, but when the walls begin to bleed, he finally decides to call in some help.  In walks Simon Feximal and their eerie night begins.

Its sometimes difficult for me to review short stories, factors have to be viewed with different considerations compared to longer books.  But for a story that reads under 5,000 words, The Caldwell Ghost packs one hell of a hell of a punch.  It’s mysterious and creepy…and even a little bit kinky.  I love the author’s creativity here!  I won’t go into any more specifics of the story, but I know this is only the first of many adventures for Robert and Simon.  I’m totally excited to see what they get up to next.

Overall Impression: I Really Liked It!