Heidi Cullinan Week Review: The Wounds in the Walls 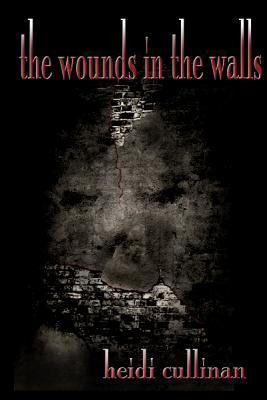 Blurb: Pete Eason’s been hit by the downturn in the economy just like everyone else, so when he gets the word that some guy named Mike Clarke needs a day laborer to clear our a rural Missouri house, he doesn’t ask too many questions before he takes the job. But Pete quickly learns that there’s something funny going on at this site. For one, Pete’s the only laborer Mike hired, and from what Pete can see, this place needs a bulldozer, not a Dumpster. Mike doesn’t so much as hand Pete a shovel, either-he seems to be hinting that the place is haunted. Pete doesn’t feel any goosebumps, and he sure as hell doesn’t see any ghosts. He’s dying, though, to know what all the gashes in the walls are about. Mike can’t see the gashes, and he’s frustrated that Pete can’t see the ghost standing right beside him, because the whole point of bringing Pete here was to release the trapped spirit in this place, a spirit that by rights Pete should be able to see better than anyone. Maybe, Mike thinks, he’s made a mistake. But before he can nudge Pete a little harder, the front door disappears, the walls begin to heave, and the ghost which has always been nothing more than a shade is suddenly aggressive flesh and blood-and Mike doesn’t think he’s made a mistake anymore. He knows he has.

Hmmmm, where to start on this one?  Well, it was definitely different.  I was interested in the beginning, as we meet the players and learn a bit about what’s going on.  And, there is a lot going on here.

Mike is a paranormal psychologist.  He hires Pete under the pretense of cleaning up a disheveled dilapidated house.  It doesn’t take long after  they arrive at the house for Pete to realize something isn’t right.  Pete sees things much differently than Mike.  To Pete, the house is completely run down, with tears in the walls.  Mike, of course, sees the house furnished and restored.  Then the ghost Aras appears.  It is a bit confusing as to what’s really going on at this point, and it jumps to sex between Pete and Aras, followed by some ménage action when Mike joins in.

So, this house is haunted, there are ghosts trying to cross over, and Pete seems to be the key to all of it.  It’s a rather short story, and it moves very fast.  There were times where I just had trouble keeping up or keeping track of the details.  I enjoy paranormal stories, but I had a difficult time with the ghost-sex in this one.  There are also flashbacks and quite a bit of head-hopping between the characters, making this a so-so read for me.  This is not typical of Ms. Cullinan’s stories, and it’s not very recent, so I think I’ll stick with her newer stories.

One thought on “Heidi Cullinan Week Review: The Wounds in the Walls”