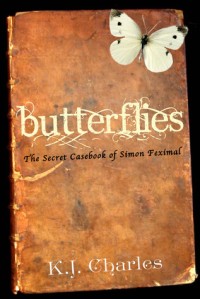 Blurb: Journalist Robert Caldwell is still smarting from his first encounter with ghost-hunter Simon Feximal. Their night in a haunted house was thrilling, but the aftermath leaves Robert hurt, disappointed, and resolved not to see Simon again.

But just a few days later their paths cross once more, this time investigating a pair of mysterious deaths: two corpses shrouded in butterflies.

Now Robert wants the truth – on the deaths, on where the butterflies came from, and most of all, on the attraction that still burns between him and Simon.

Killer butterflies?!  Who the hell comes up with this stuff?!!  Oh, right, the same creator of killer magpies and killer rats!

Its two weeks after that lust-filled night at Caldwell Place, and Robert is a bit pissed when it appears that Simon has brushed off their encounter as a one night stand.  While researching a mysterious case of death by butterflies for an article, Robert finds himself back in the presence of one Simon Feximal!  With Robert’s keen eye for observation and Simon’s supernatural expertise, journalist and ghost-hunter agree to work together…and its not long before they find themselves…errr, in compromising positions.

Another great short story by KJ Charles…a well thought out mystery and very wicked, indeed!  Like, who would fear butterflies?? humph!  (I did have a brief flashback to the hair-choking scene from The Magpie Lord that AGAIN triggered my gag reflex!  hack!)  And as expected, Robert and Simon still have some great sexual chemistry…

Totally looking forward to more cases with Robert and Simon!

Overall Impression: I Really Liked It!