Book Review: Beneath the Surface by Kate Sherwood 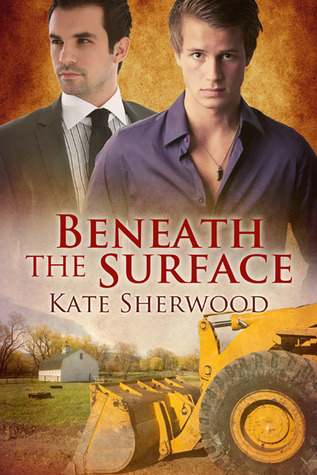 Blurb: When Peter Carr’s company sends him to Southwestern Ontario to sweet-talk the town into agreeing to a gravel quarry proposal, he welcomes the challenge. Technically he’s a lawyer, but really he’s a problemsolver. He just never expected the problem to be Caleb Sinclair, the passionate but introverted artisan carpenter who lives next to the proposed quarry site.

“Know your enemy.” That’s Caleb’s philosophy. And trying to turn fertile farmland into a gravel pit earns Peter the title of “enemy.” Caleb loves that land, and if he has to make peace with his homophobic neighbors to make war on Peter, so be it. Except knowing his enemy doesn’t turn out anything like he expected. Peter’s not the fairy-tale monster—he just might be the first step to happy ever after.

When I finished reading The Fall I immediately wanted to read another book by Ms. Sherwood. I just adored her writing and having been in such a big funk right before I read The Fall, I figured taking advantage of reading more by an author I knew I’d like was the smart decision. I’ve been wanting to reading Beneath the Surface since it came out but I just never did for some stupid reason.

This is the story of Peter, a lawyer, whose job it is to make sure townspeople don’t make a huge stink about his company coming in and turning the land into a gravel quarry. Peter loves a good challenge and lucky for him, Caleb, the closest neighbor to the quarry, is vocal enough about his displeasure to cause some townsfolk to rebel the quarry. Enemies from the start, Peter’s attraction to Caleb causes him more doubt than he’s ever felt towards his job. But what will happen when someone tries to frame Peter for a crime he didn’t commit. Will it cause Peter and Caleb to break things off just when they think they can finally trust one another?

I absolutely loved Peter and Caleb together. While they might have started with a little hostility between them, they soon developed a friendship. Actually, they wanted to keep their personal lives separate from the quarry so they went on dates, which I found very sweet. As characters, I loved that Caleb was so down to earth but fierce when it mattered. I also liked that Peter started off confident about his life and views but things slowly changed for him as he saw how his job really affected other people. I loved them together because I felt like they actually had a relationship outside of just sex.

I think my only issue was that the ‘villain’ in the story was too predictable for me. I knew as soon as the crime happened (no spoilers here, sorry!), who exactly was the one to do it. I don’t know if that was intentional or not but I wished there had been at least a little more effort to make the identity of the bad guy more mysterious.

All in all, I still really liked the story. Ms. Sherwood has a way of writing that captures my attention and keeps it. Mixed with the fact she has intriguing characters and nice plots, she’s definitely starting to become a favorite of mine. I’m looking forward to reading more books by her. If you’re looking for a nice story with an enemies to lovers feel and a little mystery, give this one a try 🙂