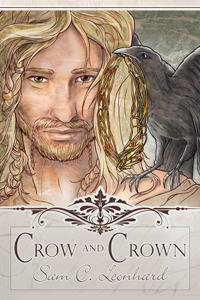 As soon as I finished Crow and Firefly, I immediately dived into this story because I just adored the start of Ari and Dagur’s journey. I wanted to know how their relationship worked, if they managed to make it into something beyond just a tolerate relationship. Thankfully, they did more than just accept each other, they loved each other. In this tale, Ari is back in his hometown after four years, showing his adopted son what it was like. While there, he comes across another shifter who is terrified that something has happened to her beloved. Ari, being very sympathetic, promises to find the missing fiancé. Unfortunately, when he arrives back home, he finds out that Dagur is nowhere to be seen since he was informed his uncle, the King, has died. Worried about Dagur, he takes off in search of him and unwittingly uncovers not only a deadly plan to kidnap Dagur but also an attempted assassination… while still stumbling upon the missing fiancé.

As with Crow and Firefly, I absolutely loved this story and the characters. Ari is not only stubborn but he’s amusing. I loved that he’s grown so accustomed to who he is and his marriage with Dagur. Dagur, on the other hand, is very secretive about Ari, which is why no one really knows whether Dagur is married to a woman or to a man… or even if that person is alive. I found the fact that people speculated on Dagur’s spouse being alive amusing because, after all, Dagur has a reputation of being ‘cruel’. Still, I really liked the two together because the reader gets a glimpsed into just how close the two have come in the past four years and how much better BOTH their lives are.

I only had two issues. One, it was still TOO short! I would have LOVED to read a novel about Ari and Dagur, not only because I just know Ari would get up to some entertaining mischief but also because I would love to see more of a romance between Ari and Dagur in a situation that isn’t rife with nervousness or fear. My second issue is that four years have passed and we didn’t get to see any of those four years, none of the developing relationship, the love that blossomed, raising their son. I was a little saddened about that. But it didn’t affect my overall enjoyment that much, it just made me wish there was a story that took place right after the marriage.

In the end, I enjoyed this one even more than the first story in this series. It’s a different kind of shifter setting, where shifters are a well-known fact and either feared or revered. The characters are interesting and more than entertaining and the situations they find themselves in are interesting to say the least! I sincerely hope there’s more to come of Ari and Dagur in the future because I would love to see more of them especially if it means more of them at court.