Book Review: Song of the Sea by Arielle Pierce 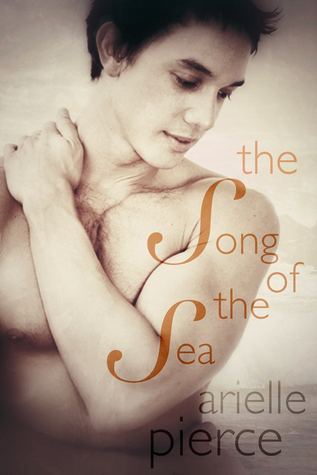 Blurb: Dylan has always been an outsider in the small Welsh fishing village he calls home. He’s smaller, weaker, twp, as the villagers would say. Found on the intertidal between land and sea as an infant, he’s always been a bit lost.

Everything changes when a damaged schooner arrives in the village, spilling its crew of exotic men from all around the globe. The handsome captain, Llewellyn, wastes no time letting Dylan in on why he feels so different.

Like calls to like, and Dylan soon learns what it is to let the siren song of the sea stir his blood. Llewellyn offers Dylan teaching and freedom from a life he’s never really belonged to. But can Llewellyn offer Dylan what he needs most of all—love?

Living in a small Welsh village, Dylan is unaware of what his destiny holds. With no desire to follow in his father’s footsteps, he’s content to become a farmer or shepherd instead of a fisherman. That is until he meets Llewellyn, the otherworldly captain of a schooner, who ends up stirring up his life in more ways than one. With a little help from Llewellyn, Dylan is introduced to who he really is – a merman. Where he didn’t care for the sea before, now it consumes him leaving Llewellyn as his rock. But when Llewellyn’s ready to leave and unwilling to give Dylan the one thing he asks for, he leaves Dylan broken hearted and vulnerable to the sea’s call.

This was a very intriguing story. It’s slow at first so that the reader can get to know Dylan and watch him comes to terms with what he is. While Dylan’s village considers him ‘slow’, I never once thought he was like that. In fact, he seems more quiet than anything. He’s also scared of becoming a gwenhidwy because he doesn’t want to become a monster. I liked seeing Llewellyn teaching Dylan about his heritage and how to use his magic. Although we don’t get to know Llewellyn all that well, his enjoyment in Dylan discovering the sea put a smile on my face. Granted, there were a few moments when I would wonder why Llewellyn acted a certain way such as him wincing or flinching away from Dylan. It was a little confusing.

I really liked this one but because of its length, I didn’t feel like all aspects of the story was as explored as it could have been, especially when it came to the ending. It’s an HEA but at the same time, it feels very open-ended and left me with a lot of questions like what has Llewellyn been doing this whole time? How have his feelings towards Dylan changed? Why did it take him so long to find Dylan?

In the end, it’s a quick, lyrical story filled with longing, desire and, most of all, discovery. The descriptions based on what Dylan experienced as a merman were intriguing especially when he got lost in the sea’s call. I’m looking forward to reading the sequel because I really want to know more about Dylan and Llewellyn reconnecting and to see how, or if, Dylan has changed.