Gay For You Week Review: More Than Friends by Aria Grace 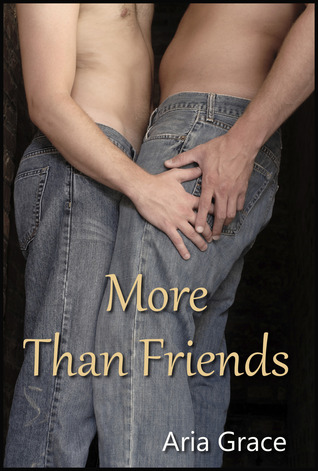 Blurb: Tired of moping around after the breakup of his long term girlfriend, Ryan knew he needed a hookup to get him out of his funk. When he met Drea, he hoped she might be the one. But when he felt more chemistry with her gay cousin Zach, Ryan felt more confused and terrified than he had in his life. He wasn’t gay but he wanted to be with Zach. How could it possibly work?

I don’t normally do sweet and fluffy, but there was something so cute about this novella that just drew me right in. It wasn’t a long or a thoroughly fleshed out story, but there was something about Ryan and Zach that I really, really liked. It may have been how they were simply normal and likeable guys, and I could picture their scenes unfolding. It may have been that it was Zach sneaking little peaks at Ryan and wondering if maybe he just might bat for his team. Or it may have been how clueless poor Ryan was, clueless but adorable.

But whatever it was, it worked for me. As soon as I finished, which was in one sitting, I instantly bought the sequel and started reading that one as well. Why? Because this first story was just the beginning for Zach and Ryan and everything was coming up roses; they are together and life is great. And that’s all fine and dandy, but gives me some angst; so after reading the blurb for Drunk in Love, that’s what I knew I was getting and so this sweet beginning pulled me in enough to keep reading.

To me, the best stories involve couples who have everything going for them. Life is great, they are in love, and the path to forever is lined in rainbows. But (there is always a but) what makes it fantastic is when  that happily ever after is derailed and the couple hits a few speed bumps along the way. That’s what grabs me. Sure, make it sweet…for a while, but then make them work for it. Throw curve balls at them and show me some emotion. That’s what I love.

So, in this first installment we have the gay boy, Zack, and the straight boy, Ryan, meet and become friends. Gay boy doesn’t quite believe that Straight boy is really so straight at all. And then when Gay boy and Straight boy fool around, well let’s just say, it gets a little steamy and Straight boy has finally realized that his lack of attraction to his ex-girlfriend was all on him, not her. So yeah, a short but sweet gay-for-you story that’s an easy, fast read without much, if any, angst at all, for now. But it’s coming.

Overall Impression: I Liked it

3 thoughts on “Gay For You Week Review: More Than Friends by Aria Grace”