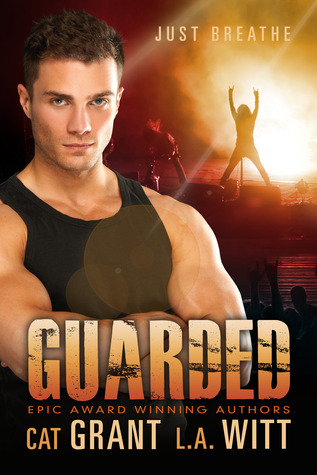 Wow, what an emotional rollercoaster this story is and not what I expected at all. There are a few things going on here, or being dealt with, that made this quite an interesting read and different from anything I’ve read before.

Jordan is the band’s front man, living the life of a rock star. He isn’t all that much of a partier and often gets migraines that put him down for the count. Jordan has all kind of issues, the first being finding a sex partner he can trust won’t sell their story, want to extort money, etc. and one he can trust to let go the way he needs. He seems to have found that trust in his bodyguard, Jase. While reluctant at first to give in to Jordan’s darker requests (breath play and/or choking), it doesn’t take him long to care enough to find ways to help meet Jordan’s needs. While he does give Jordan the breath play he craves now and then, he finds other, safer, activities to help Jordan achieve the same peace.

The other main issue here is Jordan’s best friend and lead guitarist, Daniel. Daniel has been suffering from a drug/alcohol addiction for quite some time, but he has covered it up well. Unfortunately, this last tour has pushed him over the edge, as does his jealousy with anyone sleeping with or making Jordan happy. He knows he can’t be what Jordan needs, but that doesn’t help him once he really hits that downward spiral. On the flip side, we have Jordan, who is always trying to help Daniel, wanting him to get better and be happy. Fortunately, or unfortunately, Jase has a lot of experience with having a relationship with an addict. All three of these guys are struggling throughout this story with how to help each other.

While I went into this expecting something kinky and sexy and fun, I was not disappointed to find it pulling on my emotions the way it did. I felt as though I went through the wringer myself when it was all said and done, which I absolutely love a story to do for me every now and then. Don’t get me wrong, there is plenty of hot sex and lots of sweetness here as well. The writing is spot on, as usual, and I highly recommend this if you’re looking for something a little edgier.