Early Review: No Ocean Too Deep by Leona Carver 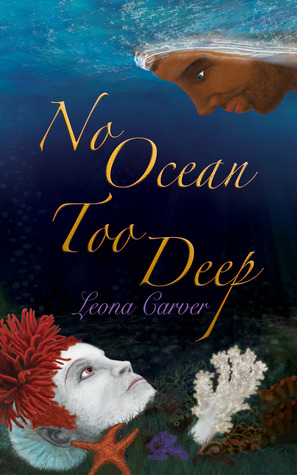 Blurb: To buck the brutal rule of the Republic, Amirzade Sharouk and his men pull off a desperate plan: Destroying the Republic’s fleet by joining forces with the legendary sea folk, masters of the leviathans, immense living weapons born of the sea and magic.

Though the gamble succeeds, one of the leviathans vanishes with a valuable human, straining an already tenuous alliance. Her caretaker Nils needs to find her as quickly as possible to redeem himself before his superiors. His search is further burdened by Dastyaf, a furious human warlord and liability in the marine realm. But after combing the deep ocean and discovering the dangers it holds, Nils realizes he may need the human more than he thought, to save his mission and himself.

Teaming up with the sea folk to defeat the Republic is a dangerous plan for Dastyaf and his people. Unfortunately, he has no choice but when the sea folk and Republic battle it out, it results in a victory… and a loss. One of Dastyaf’s allies, the leviathans, kidnapped the amir’s son and it’s Dastyaf’s responsibility to get him back. Paired up with the leviathan’s caretaker, Nils, Dastyaf’s forced to tread deadly waters with a sea witch he despises. But through the long journey to finding his charge, Dastyaf starts to enjoy Nils and understand the beauty in the sea. But sporting a new tail and a fondness for one of his supposed allies is the least of Dastyaf’s worries when the window of getting the amirzade back alive grows smaller and smaller.

This was an amazing story. To be honest, I can’t remember reading a book anything like this one. Set almost completely in the sea, it explores a new world where the sea folk are beautiful and monstrous creatures and what remains in the deep ocean is anything but nice. It has a lot of detail around the sea creatures and the ocean but these sea creatures are nothing like what we see in our own ocean. Instead, these animals take on weird shapes, colors and lights. Overall, this story has a good amount of suspense, touches on mythical creatures and has a slow developing romance.

One thing that is really potent are the characters. Dastyaf, at first, is very hostile and angry, mostly at himself but also at the fact that he needs Nils to find the amirzade. At the same time, he’s ashamed of his desire and longing for his charge but confused over his fascination with Nils. Nils is more sedate and calm. He’s confused over why his leviathan would take a human and annoyed that the one person who can give him that answer refuses to. Their journey together is very rocky in the beginning but even from the start, Dastyaf’s ability to adapt to his new sea folk body is astonishingly amazing. As the story progresses, you see both characters start to soften towards one another and develop a protectiveness for each other. It’s sweet but also sad because of the lengths they’ll go through to keep the other alive.

I REALLY loved this book. I mean, once I started, it was hard for me to put down. I was so enamored with it that I didn’t realize what time it was until I finally finished. It’s a GREAT book… until the end. For most of the story, the flow is steady, suspenseful and interesting. The last three chapters, though, are confusing, choppy and felt out of place. I felt like the author skipped a lot of scenes that would have answered many questions about who Nils is now and the tentative relationship between Nils and Dastyaf. Then, I felt more confused when Nils does something he’s not supposed to do because it would mean reverting back to what the witches just saved him from. Honestly, I’m really confused and really wished we had seen more of the scenes that were skipped over such as how Nils was treated, the efforts that Dastyaf had to go through for him and how it all came to be negotiated at where Nils ends up and especially more clarification on what Nils can and cannot do.

In the end, though, I adored this story. For the most part, it is about two shaky allies forced to work together to save someone important. Along the way they not only encounter dangerous waters but they also discover something more emotional. It’s harsh at times, suspenseful at others and sweet and sad as well. I loved the details about the sea, the creatures and the history of the sea folk. I just really wished there had been more thought and effort put into the end so that it wouldn’t have been so vague and confusing. Still a great read for anyone looking for a unique type of fantasy featuring peculiar sea folk.

One thought on “Early Review: No Ocean Too Deep by Leona Carver”