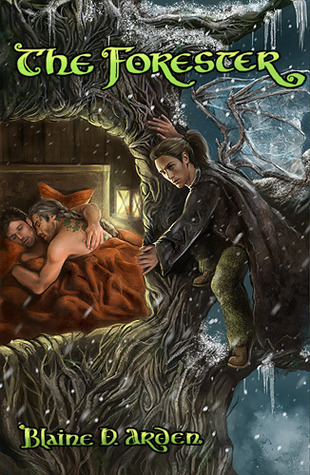 Blurb: Kelnaht, a cloud elf, is a truth seeker caught between love and faith. Worse, a murder committed ten days before Solstice reveals an illicit affair between two tree elves he desires more than he can admit: Kelnaht’s former lover Ianys, who once betrayed him, and the shunned forester named Taruif, who is not allowed to talk to anyone but The Guide, their spiritual pathfinder. When Taruif turns out to be the only witness for the crime, Kelnaht has to keep Ianys from sacrificing himself and losing his daughter, while at the same time realising he’d gladly sacrifice himself to end Taruif’s loneliness.

“Tales of the Forest” books are all set in the same world, but can be read as standalone stories.

Master Kelnaht is a cloud elf as well as Truth Seeker in his community. He is torn between fulfilling his duties and his secret desires. Kelnaht is on the hunt for the Truth after a murder is committed ten days before Solstice. His investigation reveals an illicit affair between two tree elves he desires more than he can admit, Kelnaht’s former lover Ianys, who once betrayed him, and the shunned forester named Taruif, who is not allowed to talk to anyone but the communities spiritual leader, The Guide.

A little gem I was lucky enough to review for The Blogger Girls. I want to come back as gay cloud elf in my next life please. The Fantasy genre is not my fave, however, I love to mix up my reads and step outside my norm and I am so glad I did. This is book 1 in The Forester Trilogy and my next read will be definitely be book 2, The Forester II.

I absolutely enjoyed this story from beginning to end. The Forest is not a full novel, and I was a bit worried about the amount of world building the author could add to a short story. No need to worry. The reader learns how the elf community works within the first few paragraphs. It’s not an info dump but rather little bread crumbs mentioned here and there. The author does a good job describing the elf community, the tree houses where they live, as well as the oh so very sensitive wings the elves use to get around. The premise of the story is the murder of a fellow cloud elf. It’s obvious who the murderer turns out to be, and that’s ok. It’s not the main story, which is the love affair between Truth Seeker Master Kelnaht, his ex lover Ianys, as well as the communities shunned forester named Taruif.

You can definitely feel the emotion between Kelnaht and is ex-lover. It doesn’t help that Kelnaht finds out Ianys is having a secret affair with Taruif, the elf that Kelnaht has desired for many years, or as the author defines their time, “for many turns”.

The story moves along at a nice pace and the mystery is solved without much ado. The writing is solid, and I really enjoyed the world that was created. Even though the murder was sad, the story left me feeling happy for the three elves. The love between them is sweet, and even though there is not much actual talking between them, there is obvious affection and respect. The story ends on a happy note, but it’s HFN. Lastly, we never find out why The Forester was shunned from his community. His punishment will last many, many turns, and it was a major issue in the story. I hope we learn more about that before the trilogy ends.

Thanks again to TBG for asking me to review this fantasy gem.

3 thoughts on “Book Review: The Forester by Blaine D. Arden”