Gay For You Week Review: Fireproof by Hollis Shiloh 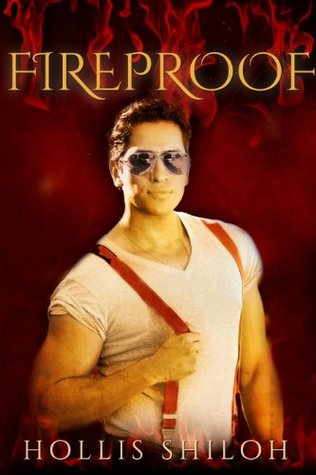 Blurb: Jett used to be a firefighter. He gave it up when he developed the terrifying ability to make fire with his mind. Panicked, he fled—also leaving behind his best friend and secret crush, Levi.

Two years later, they meet again. And somehow, Levi can forgive Jett for leaving and never saying goodbye. But now Levi’s getting married, and that hurts more than Jett thought anything could.

How will Levi take the news of Jett’s weird fire magic—or the news that he’s gay?

First, I just want to say that ‘gay for you’ is a subjective phrase. By definition Levi is more along the lines of bi-sexual because he’s been attracted to other men before and appreciates their looks BUT my feeling after reading the book was that he would never be gay for anyone but Jett. Therefore, while Levi might not exactly fall under the GFY term to some, I firmly believe that, in this context, he does 😛 Now, onto the review!

Jett disappeared two years ago when his latent fire power all of a sudden appeared, making an already dangerous fire even more deadly. In an effort to avoid any rejections from his best friend, Levi, and to escape the guilt he felt for almost killing his whole crew, he ran. Now, he’s in another county safe from anyone he’s ever known. Or at least he thought he was until he ran into Levi outside a barbecue and unable to avoid the inevitable reunion. With Jett back in Levi’s life, Levi is unwilling to let him out of his sight for a second and is more than comfortable to pick up their relationship where it left off. With Levi’s gentleness and soft possessiveness, Jett almost believes he might be able to have more than just a friendship with Levi but when Levi tells him he’s getting married, all his brief hopes come crashing down. But even with Levi’s mixed signals and his constant touching, Jett knows he doesn’t stand a chance to be with the big straight guy… or does he?

This was an interesting story and actually a bit surprising. When I think of GFY tropes, I think of the straight guy that hesitantly touches the other guy, afraid to do anything but brief caresses or barely there touches. In this book, however, Levi is the complete opposite. From the start he crushes Jett to him and won’t let go, almost as if he has to reassure himself Jett is still there and hasn’t left him again. It’s sorta sad the way Jett’s disappearing affected Levi so deeply to the point that he’s afraid of being abandoned by Jett again. At the same time, Levi’s closeness to Jett breaks Jett’s heart over and over, especially when Levi finds out Jett is gay and still flirts and teases him like they’re boyfriends. I felt sooo sorry for Jett because he couldn’t leave Levi without putting them both in pain and he could barely tolerate being with Levi because of the constant knowledge he could never actually HAVE Levi. When everyone’s feelings finally come into light and are accepted, it’s all the more sweeter because after so much pain and distance and angst, these boys can finally find happiness.

While I really enjoyed the characters and the concept behind Jett’s fire abilities, I had a few niggles. Mostly, I found the repetitiveness towards Levi’s description and his gorgeousness a little overwhelming. It seemed like every time Jett looked at Levi, he broke out in lyrical thoughts of how beautiful and big Levi was. I loved that Levi was a physically strong character but I felt like the constant need to bring up his luscious lips and tan were a bit too much. Beyond that, I felt like the resolution to the whole fiancé problem was anti-climactic and I didn’t really like how Levi handled the whole blackmailing. I would have expected him to be more clingy to Jett considering what he was about to lose and way more hostile to Jessica for her actions.

In the end, I still enjoyed the story. I loved the characters and Jett’s abilities (although I missed being able to explore how or why he had such a power) but I still liked it. The repetitiveness in descriptions was excessive and the way certain issues were resolved was weak but overall, this is a nice shortish little story mixed with a ball of sweetness and a dab of angst.

2 thoughts on “Gay For You Week Review: Fireproof by Hollis Shiloh”