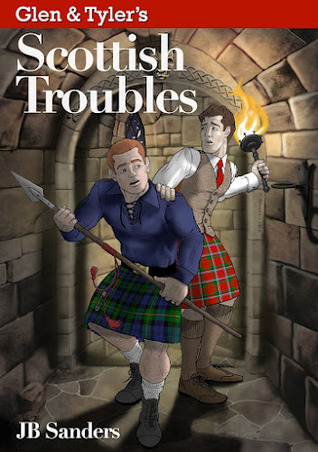 Blurb: In the second installment of the Glen & Tyler series, the guys find out what happens when you inherit a Scottish castle, tussle with international crime gangs and host formal balls. Yes, balls — with dancing and everything!

In typical Hardy Boys–er, Glen & Tyler fashion, there are secret passages, irascible old men, caves, missing treasure, fine liquor and kilts. Ok, the kilts thing is new — but believe me, you’ll like ‘em. Although there isn’t much hockey this time around, there is shinty*. There’s also some romantic anniversary thing, but really, stay for the shinty.

*For those readers unfamiliar with the ancient sport of shinty, think hockey played on a field, without protective gear and with a solid rugby sensibility. Or a riot with sticks and a score keeper.

A year has passed since the first Glen & Tyler book, Glen & Tyler’s Honeymoon Adventure, and Glen and Tyler are even more in love and happy than ever. When Tyler finally tells Glen he not only holds a title in Scotland but also owns a castle, the two (along with their entourage) fly there to uncover a multitude of surprising events. From an angry village to secret passages that lead to dangerous secrets, Glen and Tyler are once more thrust into a deadly adventure that they just can’t seem to get out of no matter where they are.

Compared to the first book, Tyler and Glen are much more evolved in their rich lifestyle. Where Tyler was always a little shark when it came to the things that mattered to him, in this book he’s perfected the role of a highly intelligent, take-no-bullshit guy. Oh, and he’s also a little snobby when the moments call for it and accustomed to getting whatever he wants. Glen is still the sweet, gentle man that grounds Tyler but he’s also settled into being comfortable around high maintenance things. The two together still trade funny banter and sexy leers, although, they felt more like just friends for most of the book, IMO, than husbands in love. They’re still sweet and love to tease and Tyler has this thing about impressing Glen and surprising him with how Tyler handles situations. It’s adorable and always made me chuckle whenever Glen would get exasperated at Tyler and then concede that it was more fun to be surprised sometimes.

As with the previous book, my biggest complaint with this one is that the overall story is chaotic. It was hard for me to follow along and clearly understand what exactly was happening. The shift from one scene to another was jumpy and most of the time didn’t connect to the previous chapter so it made following along between one instance and another difficult. There seemed to be a lot of side stories that didn’t mean much to the overall plot except maybe to add humor or show that Glen and Tyler can still be normal guys. But, to put it bluntly, I was confused for most of the book at just what Tyler and Glen were trying to uncover and why it was so important. It was bewildering and, to be honest, I still don’t really understand what the overall goal was for the situations Tyler kept putting them in. Beyond that, there was still the issue of repetitiveness (like the constant mention of Glen’s doctorate topic in scenes that weren’t necessary or relevant to the story) and some over the top reactions to just WHO Glen and Tyler were.

Nonetheless, I won’t deny that I still enjoyed the book. It’s fast-paced and even with being confused for a majority of the story, the characters are entertaining and there’s surprisingly enough suspense spread throughout the book to keep you interested. I liked Tyler and Glen as characters and especially like that we got to see more into the side characters lives. Based on the ending, it’ll be interesting to see what Tyler has in store for us next.. I just hope the next book isn’t as confusing to follow along as this one was.