Blurb: Relationships aren’t rocket science. If they were, I might stand a chance of figuring one out.

Elijah
Saying I’ve had a crush on my best friend’s older brother, Pax, most of my life is like saying the big bang was just an explosion. It’s true, but I’m not sure that quite captures the essence of its true enormity.

I know he’s only hanging out with me because I’m new in town and getting my PhD doesn’t leave me with much time to make friends. And even if it did, my strength is mathematics, not friend-making. What I don’t understand is why he kissed me… why he seems to want to keep kissing me. I don’t think my advanced physics knowledge is going to help me figure this one out. But I think for once I’m okay with not knowing, as long as Pax and I don’t know together.

Pax
He’s still the awkward nerdlet I remember…he’s also probably the cutest, most tempting man I’ve laid eyes on. I know I should keep my hands off him, but this thing between us is like a force of nature. I want to be his first everything. He says we’re nothing more than atoms crashing into each other. I’m no scientist but I don’t think either of us are braced for the explosion.

**** Rocket Science is a stand alone MM romance featuring an inexperienced nerd, a cocky player, and a satisfying HEA****
END_OF_DOCUMENT_TOKEN_TO_BE_REPLACED

Blurb: A prim and proper aspiring doctor and a destitute martial artist—both with hurts to comfort. Each with just the cure the other needs.

Corbin Friel hates mindless sports, especially fighting and boxing. As a medical student, he wants to help others, not watch them beat each other senseless. But his sister, Lala, can’t get enough of rough-and-tumble sporting events, and she drags her brother along whenever she can.

Keon Lynch doesn’t have much going for him. He’s broke, he lives alone in a new state, and he’s estranged from his family. But at least he has his dream—becoming a professional UFC fighter. Keon trains every day, and if he can just score a few more wins, he’ll get his ticket into the ranks of professional competitors.

But an unexplained pain jeopardizes Keon’s dream. During a backstage meet-and-greet, Corbin recognizes the telltale signs of a bone infection, which could cost Keon his leg. Unable to ignore Keon’s situation, Corbin begrudgingly decides to help. And while he gets to know Keon, finding him more desirable with each interaction, Corbin’s ex-boyfriend isn’t pleased with the development….

And he’s determined to keep Corbin for himself, no matter what. END_OF_DOCUMENT_TOKEN_TO_BE_REPLACED

AudioBook Review: Bad to the Bone by Nicki Bennett

Posted on October 24, 2018 by thebloggergirls

Alex can’t think of himself as anything but a failure. In high school, he was on the fast track to a career in pro football when he forged an unlikely friendship with a half-Comanche boy from the wrong part of town, Ricky Lee Jennings. Their shared love of books could have grown into more—but a homophobic teammate attacked Ricky Lee, and Alex wouldn’t risk his scholarship to defend him. Ricky Lee was kicked out of school, and Alex never heard from him again. Now Alex’s glory days are nothing but a memory. An injury ended his football aspirations, his marriage fell apart, and his dreams of making a difference as an environmental lobbyist are as dead as his fantasies of sports stardom. But all that could change in one magical night, when Ricky Lee shows up at their high-school reunion.
END_OF_DOCUMENT_TOKEN_TO_BE_REPLACED

Blurb: What if werewolves were real?
What if one of them was different?
What if you were a defective werewolf?

This is the story of a boy becoming himself, embracing his vulnerability and learning to accept and love.

This is a story about a werewolf, trying to find the answers to why he was born defective.

And maybe that’s the very reason I become the main course on the menu.
END_OF_DOCUMENT_TOKEN_TO_BE_REPLACED

A modern retelling of Jane Austen’s Pride and Prejudice.
END_OF_DOCUMENT_TOKEN_TO_BE_REPLACED

Blurb: A lustful young alpha meets his match in an older omega with a past.

Professor Vale Aman has crafted a good life for himself. An unbonded omega in his mid-30s, he’s long since given up hope that he’ll meet a compatible alpha, let alone his destined mate. He’s fulfilled by his career, his poetry, his cat, and his friends.

When Jason Sabel, a much younger alpha, imprints on Vale in a shocking and public way, longings are ignited that can’t be ignored. Fighting their strong sexual urges, Jason and Vale must agree to contract with each other before they can consummate their passion.

But for Vale, being with Jason means giving up his independence and placing his future in the hands of an untested alpha – as well as facing the scars of his own tumultuous past. He isn’t sure it’s worth it. But Jason isn’t giving up his destined mate without a fight.

This is a stand-alone gay romance novel, 118,000 words, with a strong HFN ending, as well as a well-crafted, non-shifter omegaverse, with alphas, betas, omegas, male pregnancy, heat, and knotting. Content warning for pregnancy loss and aftermath.

END_OF_DOCUMENT_TOKEN_TO_BE_REPLACED

Blurb: Love doesn’t come with a syllabus. Kelly Davidson has waited what seems like forever to graduate high school and get out of his small-minded, small town. But when he arrives at Hope University, he quickly realizes finding his Prince Charming isn’t so easy. Everyone here is already out. In fact, Kelly could be the only virgin on campus. Worst of all, he’s landed the charming, handsome, gay campus Casanova as a roommate, whose bed might as well be equipped with a revolving door.

Walter Lucas doesn’t believe in storybook love. Everyone is better off having as much fun as possible with as many people as possible – except his shy, sad little sack of a roommate is seriously screwing up his world view. As Walter sets out to lure Kelly out of his shell, staying just friends is harder than he anticipated. He discovers love is a crash course in determination. To make the grade, he’ll have to finally show up for class – and overcome his own private fear that love was never meant to last. Warning: This story contains lingering glances, milder than usual sexual content for this author, and a steamy dance-floor kiss. Story has no dairy or egg content, but may contain almonds.
END_OF_DOCUMENT_TOKEN_TO_BE_REPLACED

Early Review: In the Distance by Nikka Michaels & Eileen Griffin

Blurb: Tyler Mitchell has worked hard to rebuild his life after his family kicked him out. A culinary student and sous chef who spends his spare time volunteering with kids, he’s happy enough even though he has no time to consider a relationship.

Trevor Pratt is finally getting over losing the one person he wanted to spend the rest of his life with, but it’s taken screwing every cute guy in Manhattan to get there. He’s vowed to repair the friendship he broke along the way, but that’s hard to do when his friend’s new employee catches his eye. Despite being warned to stay away from Tyler, Trevor turns on the charm.

Romance is a terrible idea. Trevor is ten years older and a relentless playboy. Tyler is still unsure of his place in the world. Neither of them is ready for life-changing love, but as things heat up, their chemistry in the bedroom might just take that decision out of their hands.
END_OF_DOCUMENT_TOKEN_TO_BE_REPLACED

Blurb: Mason Blackmoor just can’t compete with his brothers, much less his father. They represent the epitome of black magic, strong, dark, and wicked, and though Mason tries to live up to his respected lineage, most of the spells he casts go awry. To make matters worse, his active power has yet to kick in. While his brothers wield lightning and harness the cold, Mason sits on the sidelines, waiting for the moment when he can finally enter the magical game.

When a dead body is discovered on the football field of his high school, Mason meets Drake Carpenter, the new kid in town. Drake’s confident demeanor and quick wit rub Mason the wrong way. Drake is far too self-assured for someone without an ounce of magical blood in his body, and Mason aims to teach him a lesson—like turn him into a roach. And if he’s lucky, maybe this time Mason won’t be the one turned into an insect.

Not surprisingly, the dislike is mutual, and Drake does nothing to dispel Mason’s suspicion that the sexy boy with a southern drawl is somehow connected to the murder.

If only Mason didn’t find himself inexplicably spell bound whenever they are together, they might actually find out what danger hides in the shadows.

END_OF_DOCUMENT_TOKEN_TO_BE_REPLACED

Book Review: Roses Are Red and Thorny…Ouch! by Jackie Nacht 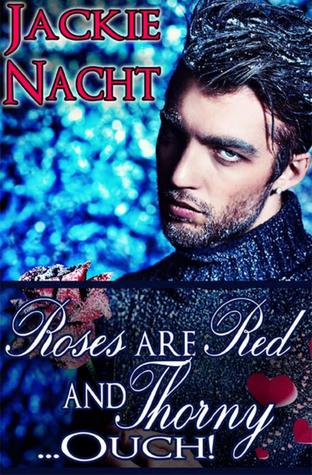 Blurb: Asking someone out for Valentine’s Day is simple, getting them there without a vehicle? Not so easy.

Shaun works at the local flower shop while going to college full time. As Valentine’s Day approaches, he has to watch all the people come in and get flowers for their significant other. Wishing he had a Valentine, he didn’t expect a sexy man to walk right in the shop and ask him out.

Ian has watched his friends find their partners all year, and when one forces him to go to the flower shop, he spots the sexiest geek he’s ever laid eyes on. Asking him out is easy, going on a date without a car…oh crap!
END_OF_DOCUMENT_TOKEN_TO_BE_REPLACED